Need to sell your classic? Post details here, and remember to include photographs or a link to a photograph, your location, asking price and contact details. Please note: Commercial links may be removed, and posts over 60 days old will be auto-pruned to keep the content fresh. Please - don't post to "bump" your (or anyone else's) thread - gratuitous bumps and unrelated posts will be deleted.
Post Reply
306 posts
Message
Author

No, not just you mate, who wouldn't enjoy a spot of mindless destruction?

And a reminder that Porsche sometimes put the engine at the front! Sure to be a desirable tractor that one.
J
"Home is where you park it", so the saying goes. That may yet come true..

I was able to view the Toyota one, the first two wouldn't let me look.

These more modern HiAce and upmarket things like that are lovely inside, but once you're used to one of these, seen here crushing the trolley jack when my local tyre place hadn't anticipated that the van could possibly weigh that much: 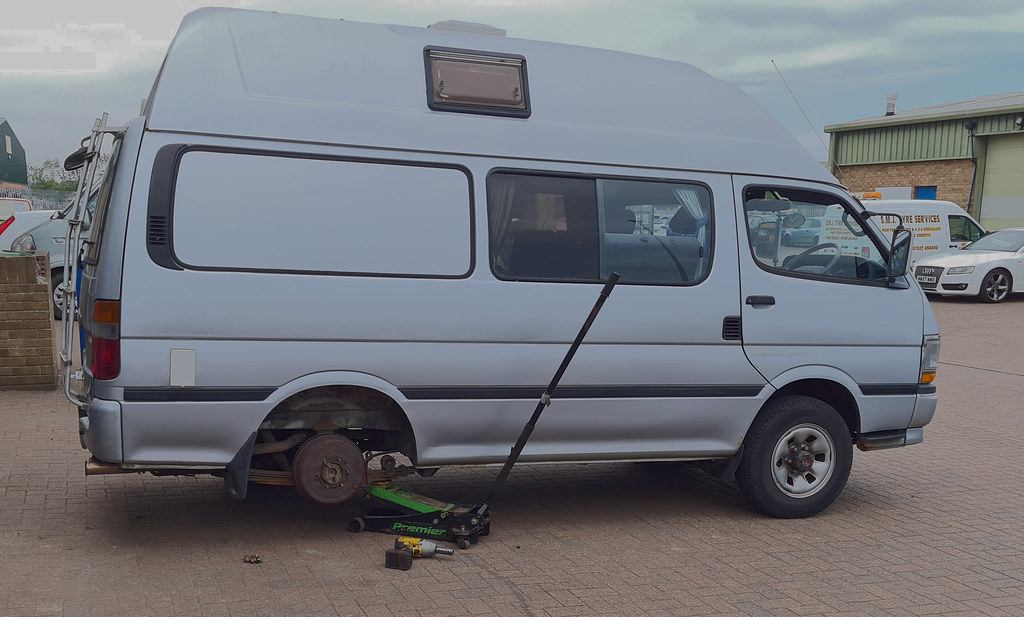 It would feel weird to drive a thing with a bonnet and an engine up front. Even if the newer van does (it does..) come with even better seats and a three figure power output, which mine only achieves if you count in Milliwatts.

That said, I think that the wheel studs on the new vans probably all come with right hand threads. That would have saved a good hour, the hour that it took the chaps to work out why their expensive looking electric impact tool fell apart when they were expecting some loosening to happen on the other rear wheel when they tried turning its nuts in an ACW direction.
And no, that's not chassis rust or sill rust or even rust on the closing panel below the step, that's what Ensis looks like when some of it had evaporated since last October, when I applied the guts of a gallon of the stuff to everything! Maybe I should use a yard broom to apply some thick, mastic-based black goo, when the time comes to top up on the protection, that doesn't turn rust colour!

Possibly, unless of course you're a Halfords management type, in which case it was a different van, mine was robbing a post office in a small town some 50 miles away at the time of the incident and they can't prove a thing. After all, one Hiace van looks much the same as another.

Thank goodness I keep the old rogue away from garden centres.

When you are planning your next visit will you be selling tickets for the event or filming it for those who are unable to attend?
https://www.facebook.com/marketplace/it ... 933016976/
Top
Post Reply
306 posts

Users browsing this forum: No registered users and 8 guests