What classic vehicles have you seen?

Here's the place to chat about all things classic. Also includes a feedback forum where you can communicate directly with the editorial team - don't hold back, they'd love to know what they're doing right (or wrong of course!)
Post Reply
2215 posts
Message
Author

Martin Evans wrote: ↑
Thu Dec 21, 2017 2:46 pm
Then in the afternoon, I saw a very early (X reg) VW Polo Mk2, in Morrisons Ebbw Vale. I dare say that was a rarer car now, than an MGA. The Polo was Mars red but a tad faded, though it looked salvageable and in tact. The interior looked tidy. I suspect it may have been bought new by elderly people, who didn't use it a lot and who still knew that a garage was meant for storing cars. Something has got to explain why it's still here after at least 35 years. I don't imagine spares are going to be readily available for a car like that now; I wonder does the owner see it as a classic or just a cheap car?

Good point. I bought my Missus a brand new VW Scirocco in 1986, it was the limited edition called The Scala. She kept that right up until recently. She kept all the receipts, the MOT's, the old tax discs. Everything that was spent on the car, she kept. Added to that, the car had always been garaged, she even had the luxury of garaging the car at work. Neither of us ever thought of that car as being a classic, but, we did realise that after a couple of break in attempts, once the car became a lot more rare, she could no longer use it as an everyday car. In year 2000, I bought her a low mileage MK3 VW Golf, would you believe it? One of the weekly publications, Classic Car Weekly or CC Buyer, ran a feature on the Mk3 Golf as becoming a easy entry into modern classics. Just like the Scirocco, my first reaction was: "Get a life."

Like the couple driving that Polo, my wife and I are a couple of geriatrics. We grew up in an age when cars were made of inferior materials, you changed cars out of necessity before they rusted of their wheels. Back in our day, there was no such thing as modern classics, old cars were known as bangers. To us us they still are, that goes for that Polo, the Scirocco and the Golf.
Top

In the film: From Russia With Love, what's the green car that Bond is driving, the one at the start of the movie?

I'm frankly more alarmed by the shorts, which have no place in an A-rated film! But I digress. The car is a 1935 Bentley, with body by Park Ward, here's a frame from slightly after the one you posted: 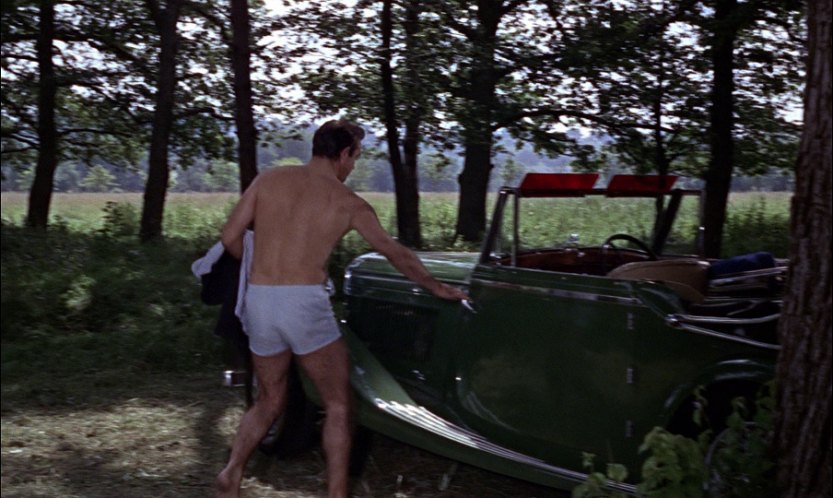 A red Hillman (I didn't see the badge but I presume it was badged Hillman) Imp saloon went past the shop today.
Rules exist for the obedience of fools and the guidance of wise men.

This one is perhaps on the cusp of classic status and is certainly a nice car. I saw what looked like a tidy VW Corrado VR6 parked outside what I think is a holiday cottage, on my way to the shop. It was an L plate, so not far off 25 years old. Somehow it was a nice, understated car; not the ostentatious, "Hairdresser's" car that seems to have taken the place of cars of that type these days. Not sure I'd want to take one on (Just how good is the spares back up?) but good luck to those that do.
Rules exist for the obedience of fools and the guidance of wise men.

There was an XJS in the workshop when my missus picked up her car from service. Coincidentally, I saw a rerun of W/D tarting up an XJS recently. I tell you daytime TV is not to be recommended, but when you have to be patient as you recover from surgery, it's a book, TV or the web.
The XJS had a hard act to follow, replacing the E Type, it had a poor press and was much maligned by purists. W/D said that it has become an iconic car in it's own right. Well, like the rest of it's B/L stable companions, it was, and still is, RUBBISH!
Top

ght..you are such a little ray of sunshine today

I saw a Fiesta Mk3 on Wednesday. It was on an F plate, so on the way to 30 years old. It didn't have the look of a cherished classic but someone must have cared for it at some point, for it to still be around. Another case of rarer than what we come to expect, when we think of classic cars.
Rules exist for the obedience of fools and the guidance of wise men.

Users browsing this forum: No registered users and 3 guests