Got something to say, but it's not classic related? Here's the place to discuss. Also includes the once ever-so-popular word association thread... (although we've had to start from scratch with it - sorry!)
Post Reply
90 posts
Message
Author

Since my last post on this thing it spent i replaced 4 tyres and the rear discs and pads etc approx €1000 7 weeks with Renault trucks. Injectors out and tested replaced part of the fuel rail €1800 and it continued to break down so i took it to anther garage and it refused to break down for them €28 (2 weeks) then i ran i with regular breaking down until the end of October when it died on a crossroad in my local village.. only 2 people asked if i needed help.. one was my kids school teacher with a yaris and another lady with a twingo... by then id called head office and she towed me home with the Clio.... i found a chap who took the time to drive it until he had a problem... he replaced a cam sensor and it seems to be ok now.. whilst he was at it he replaced the clutch and all the cables that go with it and replaced the window mechanism as the drivers window was held up by 2 wedges.. this guy took 3 months but i can't complain as he was doing it after work.. he was going to change the engine oil but is off sick and can't do it now.. so i have bought the oil and filter to do it myself but i cannot for the life of me locate the filter housing! If anyone has any idea where its hiding id really appreciate it!! Its a 2007 Renault mascott 2.8 120 dxi...
Top

Hmm, is this the French market name for what we in the UK know as the Master? Seems as though you're getting somewhere but sorry, I couldn't find an image that illustrates exactly where they hide the oil filter container.

Have you asked the local Ford dealership what sort of p/x money they'd allow against an equivalent Transit?

They do exist!! Honestly its not some figment of my imagination!
https://images.app.goo.gl/a6vHgCFvtLy8ddKT8
Sometimes they are known as the Renault master propulsion.. just to confuse me even more..
Top

JPB wrote: ↑
Mon Jan 20, 2020 10:27 pm
Have you asked the local Ford dealership what sort of p/x money they'd allow against an equivalent Transit

My brother and I were in the distribution business up and until 2011. One of our clients was the wholesale firm that supplied the Lloyds Chemists shops. We had a fleet of twenty odd Sprinters and two Transits. The Sprinters always behaved impeccably, so after selling up, I kept the youngest one, it was just a year old. I had plans to turn it into a camper van, nine years later and it's still in the planning stage, but by now it's clocked about 85K miles without so much as a hint of a problem.

The two Transits we ran because we covered The Isle of Wight. The ferry charge is in half metre increments, Ford's short wheelbase is shorter than Mercedes, so we had two Transits, beefed up with twin back wheels, and a high body. One of those Transits went through the same catalogue of mechanical problems as Dick described with his Renault. Ford just plugged in the diagnostic and came up with: "We can try this, we can do that and charge you a fortune for the privilege," but nobody really had a clue why it broke down all the time. It came to the point where we nearly let it go for a grand just to offload it. Then my brother remembered Simon, a trained mechanic with his own business whom we had used in our early days. Simon didn't plug in the diagnostic, but he did say what he thought it might be, after returning from a test drive. The van hadn't broken down but Simon's experience had picked up on something.

He told us that he would take the diesel filter out and leave it on the bench, upside down, overnight. In the morning we got a call to come and see. There in the pump was droplets of water floating on the diesel. Simon explained that he thought that some garage had let their fuel tanks fall to low and as a result, condensation had been sucked in when the van was being fuelled. It cost £800 to have the tank and entire fuel system cleaned, never had a minutes' trouble after that. Point of this tale is twofold. The best vehicles might not be the cheapest but they do pay for themselves in the long run. And secondly, find yourself a skilled fitter, garages today employ technicians who slavishly follow the diagnostic. When they have to think for themselves they are f****d.
Top

Rich, I do like a vehicle with a face! Can't really add anything more though, since the secrets of the engine bay seem to be very closely guarded in cyberspace. Maybe you need to join an owners' club and learn a funny handshake to get to the heart of the thing? I can see it now, a monthly meeting that takes place in a secret location, known only to members and then only by personal messages sent the hour before the start of the event. Sun-bronzed people of a certain age, all wearing their "I f'kin love my broken Renault, me" t shirts and sitting around eating snail sarnies & drinking, lots of drinking as only that's going to take the pain away..

Well I'll be darned. Someone actually makes a t-shirt with that very slogan already on the front, perfect: 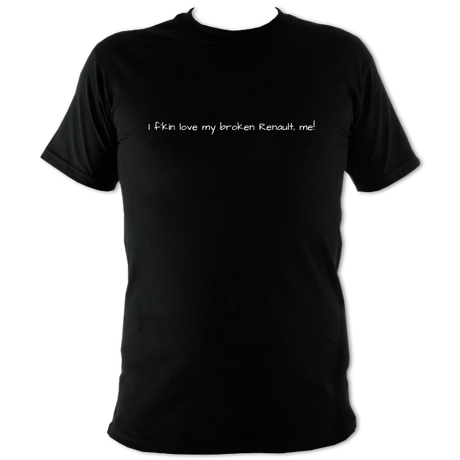 @GHT: I'm intrigued. With what did you cover the IoW? I do hope it washed off without too much hassle. Also, would the Mercedes-Benz engine not have reacted in much the same way to water in the fuel? If that's the only difference then I'll have the otherwise fully working Ford please, and that from someone who really isn't mad about Fords.

Thanks chaps! I took it for its emissions test today and asked the guy where they hid it, so he popped it on the ramp and found it for me.. emissions test pass and a trip to the builder's merchant then when I got home i did an oil and filter change.. now starter motor is sounding a bit sad...
Top

The starter should be almost as easy as the Mr2 alternator job, shouldn't it?

Thanks mate.. tea all over my phone

A man of your superior intelligence would surely have got the gist that covering was logistics terminology. We delivered pharmaceuticals to chemist shops, hospitals, nursing homes and Parkhurst prison. The methadone that went in there.

JPB wrote: ↑
Tue Jan 21, 2020 1:11 pm
I do hope it washed off without too much hassle. Also, would the Mercedes-Benz engine not have reacted in much the same way to water in the fuel? If that's the only difference then I'll have the otherwise fully working Ford please, and that from someone who really isn't mad about Fords.

When it comes to a working van, 25,000 miles a year or more, I found that any van that had front wheel drive just couldn't take the punishment that a rear wheeled drive van could. One manufacturer that did have wheel rear drive that I will never, ever entertain is Iveco. We inherited two of them with the contract, they went as soon as their contracted time was up. I have been out of it, (work) for so long now, I don't see those long wheel based Ford Transits these days, do they still make such a model? It's not Ford vans that I have any issues with, it's their aftercare, no problem if you can do it yourself but unless you have someone skilled, leaving it to Ford technicians is an expense that you can do without.

And on the subject of vans, one van that will never see the driveway of GHT Towers is this abortion. The Maxus lives on with a new badge. Pass the brandy please.

Users browsing this forum: No registered users and 7 guests