Got something to say, but it's not classic related? Here's the place to discuss. Also includes the once ever-so-popular word association thread... (although we've had to start from scratch with it - sorry!)
Post Reply
3189 posts
Message
Author

ive been watching this for a while, needs restoring.. it started out a while ago at 7000€.. now its getting a bit more sensible but has about 170,000 miles on it

One of the reasons I'm not thought highly of in MG circles is because I'm not a stick of Blackpool Rock, I don't have the letters MG running right through my body.
If I told you that the MGA doesn't float my boat you can see why MG types throw a hissy. I'm not struck by the TF either, by that I mean both the 1950's model as well as the 1990's one. I do like the MGB but there's so many of them they are boring.
One car I do like is the Morris Minor Traveller, but again, there's so many of them. Did you know that Issigonis got his bulbous wing, going into the door, idea from Packard, whilst on a trip to Uncle Sam's shores? Now I wonder why I have to agree with him?

You like Lambos, Rich?
Lamborghini, just for Rich.
Top

Loving the GSA, I happen to know that car since its previous owner, a friend and one of the best engineers I ever had the pleasure of knowing, put it back on the road a few months before I took a photo of the car back in 2013 (below).
Assuming that I may still post links to images that are already up at flickR, there should be another piccie of the car coming along, seen with that damned DSG equipped Golf TDI that I owned for two - oil burning, gearbox failing, engine boiling, random stuff falling off ** - years: 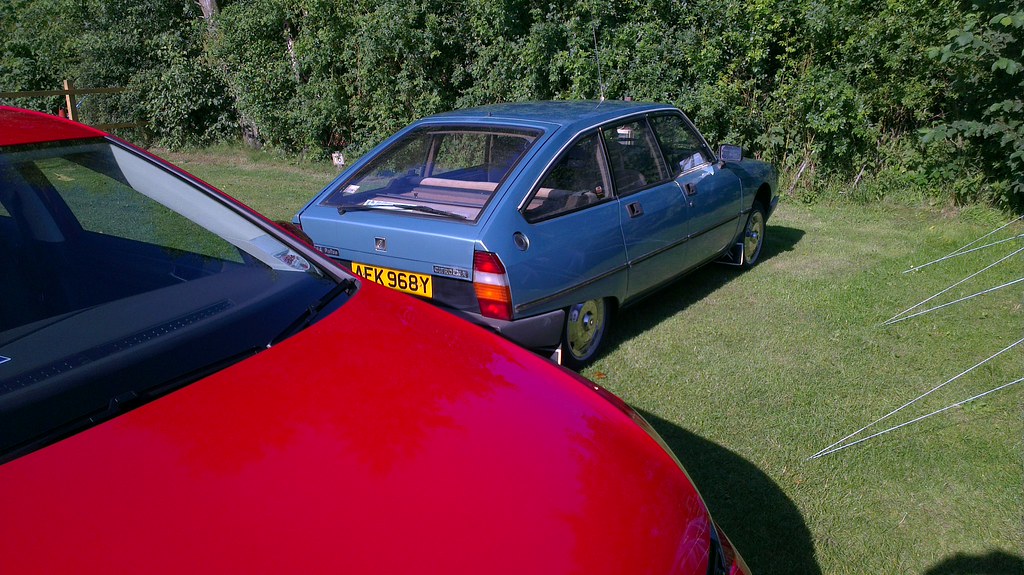 Loving the CX too. That price has to be very fair for such a low mileage, original car. What a beautiful thing.

**- Do you want genuine reliability, in the sense of cars that will keep on working without fail for many miles? Buy Japanese and spend the cash left over on Ensis fluid to keep the bodies from rotting away, not that this is such an issue with Toyotas as it is with my baby Mitsubishi, which was supplied quite literally without anything other than a very poor coat of body colour paint underneath and whose net weight has risen by a good 17Kg as a result of my rust protection & sound damping measures..

Or go for an older Volvo, they never seemed to go bad either, crankshafts in 240 B21 engines apart, the only five bearing engine I can think of whose crankshaft would bend, taking the bearings with it, this in my case on a 1979 244GLE that had only covered 172,000 miles at the time, used no vital fluids apart from fuel, had excellent oil pressure, factory-like compression figures and a very sweet sounding engine indeed, but gave me no warning that it was about to expire in an embarrassing manner two weeks after I'd sold it to someone I knew well.

JPB wrote: ↑
Tue Jan 22, 2019 1:20 pm
Loving the GSA, I happen to know that car since its previous owner, a friend and one of the best engineers I ever had the pleasure of knowing, put it back on the road a few months before I took a photo of the car back in 2013 (below).
Assuming that I may still post links to images that are already up at flickR, there should be another piccie of the car coming along, seen with that damned DSG equipped Golf TDI that I owned for two - oil burning, gearbox failing, engine boiling, random stuff falling off ** - years:

Well there you go, you think that the shite B/L car, The Austin Maxi, is the best thing since Britney Spears flashed her fanny whilst getting out of a car. (I wonder why she didn't have any knickers on?) I know from experience that Austin Maxis are beyond redemption. My Missus' Golf TDI is 21 years young and still going strong. I was going to moan about the new clutch, but as it was, the car was 15 years old at the time. Only other snag was when Mr Nobody grazed the front nearside wing, allowing the tin worm entry. A bolt on replacement soon sorted that.
Top

Phwoooaaarrggh! An old caravan with the face of a Visa, what's not to like? Apart from the manual gearbox of course, but one could emply a live-in chauffeur since the Citroen would provide both work and living space for her sorry, make that "the lucky applicant of any gender" as I could share a vehicle with anyone as opposed to not being able to enjoy it.

Silly plan though eh? Nah, I bought a first generation Discovery remember. Now that was silly!

im keen on the mgf thingy, its cheap & its cheap.. the anglia is for my inner vyvyan...

I have to share this brilliantly written advert!
If you read it you will end today with a smile, Guaranteed!!!

I bought this car in August last year for a bit of fun and to help me out while my other scrap pile was being repaired.

It was cheap at the time, but 3 weeks of full throttle action and 2 near-side rear wheels put a stop to that.

On the way up north one evening, the head gasket decided he'd had enough and had a word with my wallet. They conspired to ruin my journey and took a 4 week all-expenses paid trip to the 'not-so' local mechanics to have a break and nice freshen up. Whilst in this motoring paradise, the water pump, cam belt and a load of other gaskety type parts also got involved in the family themed fun. 2 massively overpriced train tickets later, I'm back to collect the silver surfer.

Wunderbar! I've got my pocket rocket back. After a week of running her back in, she starts showing she's not a morning person. Turns out the battery had heard what had gone off between the gasket and my wallet whilst on their break. Heart broken, she went on a power binge for the entire 4 weeks.

Obviously not having had any go-juice since the months worth of pointless work, the power junkie went into recession and needed a jump everytime you wanted her to get moving. After 2 weeks of this B-S, the wallet finally manned-up and a new, pokey teenager of a battery was found who loved doing everything whenever you needed him to.

Booty-ful. Everythings getting along nicely, lets carry on this 30 year relationship happily.........

Over the entirety of this process, a sub-plot had emerged.

It seems the oil pressure gauge on the dash decided it wanted to look like it had slowly stopped working, only to act as a decoy whilst all the engine oil made a run for it. After 5-6 weeks of tunneling through multiple gaskets and working around blind plastic gaurds, the hydrualic lifters finally sounded the alarm. A trip to the hospital-le'halfords was arranged and oil with a new plot killing additive was added.

Alas, it was too late. The escaping oil had started a revolution in the lower ranks. Fury ensued and a riot broke out.

When I say riot, I mean con-rod. And the out was through the side of the block. In spectacular fashion of course.

So, the car will require a new engine, but does still have 5 months of MOT left. Just enough time to buy it, trailer it home, drop in a new engine and get the top down for the summer.

'Awesome, I can have an MX5 that's registered as a 1.6 with a 1.8 engine in it that looks awesome in the summer!' Not so fast buddy-boy.

The previous owner had replaced the front bumper and seems to of given it a halfords magi-can special. Pretty sure he thought he'd made a mint job, so had a crack at the bonnet to.

The lacquer on the near-side front wing saw this and opted out of getting involved, so hop-footed it.

Whilst in his power-booze rage, the battery also battered the side of the wing. Bloody typical.

The latest near-side rear wheel also decided it wanted to get involved in all the action going off and got into a quick fling with a high kerb. Luckily one of his younger 14" year old brothers stepped up his game and re-joined the gang.

In conclusion, this is a project car for the more advanced car-guy or a bit of a head-ache for the average car-breaker.

It will need trailer-ing away. It's currently in a nicely placed lay-by I found on it's final journey, so if you'd like to pay to watch me burn it, please feel free to start bidding now!

Cash on collection is fine, or paypal, it all goes in the same place anyway. Just no cheques. They belong in the museum like the people still using them.

Any questions, send them through and I'll see if I can be bothered to answer them.

The vendor was doing so well until the bit about people who still use cheques.

What a pompous individual, I hope that they get a massive parking fine for leaving their ill maintained car in that lay by and that they catch a serious dose of lice that they then spread to each and every one of the farm animals with which they're intimately acquainted.
There's nothing wrong with cheques, would this person have us send postal orders to them instead?

Jeez, what a judgementalist and can the car be blamed for the driver's absence of driving skills? An MX5 is predictable to the point of tedium, so anyone who loses rear wheels to oversteer-related damage really ought to be issued with a licence that forbids their being allowed near anything with rear wheel drive, anything with more than 43 bhp and anything with an internal combustion engine. It's almost worth becoming a f*cebook victim just so that I can abuse this clown in person!

I shall, of course, withdraw the above in its entirety if they apologise for the cheque related attempt at humour. What a twit! Cheque books don't track your movements and send personal details about their users to aliens who then come to our planet and abduct us in order to harvest our organs. Think on that, you MX5 killer you!

Users browsing this forum: No registered users and 7 guests