Ones you should never have sold?

Here's the place to chat about all things classic. Also includes a feedback forum where you can communicate directly with the editorial team - don't hold back, they'd love to know what they're doing right (or wrong of course!)
Post Reply
26 posts
Message
Author

Two which immediately spring to mind. 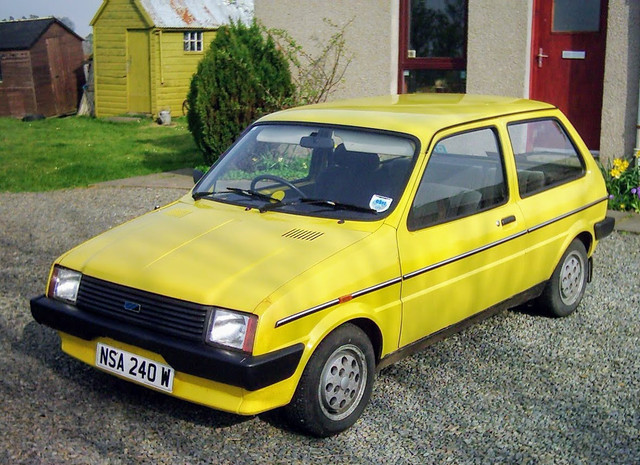 Very early Mk I miniMetro HLE in the best colour. Had barely any rust anywhere aside from that one wing (subframes were still shiny!), and had only done 20K or so miles. She vanished barely a month after I sold her, and this was when Metros were worth pennies, so I suspect she was scrapped and the engine ended up in a Mini.

Second was my Renault 25 Monaco. Only had it a few weeks, was handed on to the local "cheap car guy" to strip of useful parts and scrap when it turned out to need the rear suspension arms changed for the MOT.

I'd have sorted it in a heartbeat now, but had neither the time nor ability back then. Still the most comfortable car I've ever been in bar none. The XJS that's just arrived on my drive is one of very few that manages to come close. Sadly I don't even have a decent photo of her.
My website - aka. My *other* waste of time
Current fleet: 73 AC Model 70. 85 Sinclair C5. 85 Jaguar XJ-S V12 HE. 90 Mercedes 208D AutoTrail Navajo. 96 Citroen Xantia Activa.
Top

Very early Mk I miniMetro HLE in the best colour. Had barely any rust anywhere aside from that one wing (subframes were still shiny!), and had only done 20K or so miles. She vanished barely a month after I sold her, and this was when Metros were worth pennies, so I suspect she was scrapped and the engine ended up in a Mini.

Never could understand the interest in late B/L cars, it lacks styling and is just a box on wheels, but each to their own. If you really fancy rekindling your love of B/L's er, finest, then have a look at this, nearly forty years old, under ten thousand miles and every invoice, mot, tax disc and scrap of paper imaginable:
https://www.ebay.co.uk/itm/283643987004
Top

I had a white metro.. a real pile of sh#te.. i gladly loaded it onto the trailer and scrapped it.. sadly i was ran off the road and buggered two tyres on the trailer which cost about £100 to replace.. not including the time wasted... so i don't miss my metro at all...
Top

TD (metric) tires weren’t they, cost a flipping fortune, had the darn thing on my Monty Est....

GHT, don't sugar coat it, just say whether you like a Metro or not!

Thing is - regarding the ultra low mileage MG Turbo that may, or may not, be overvalued by the people who seem to find the low mileage stuff that's missed by the rest of the world, but whose white background, studio-style images are a pain in the derrière to view - that's exactly the sort of specimen that I'd avoid and not because it's clearly worth a bob or two (maybe £11500 with a following wind), but because the upmarket versions of the prosaic cars that were common in their day are invariably the less desirable to those of us who spend their time on Autoshite when we're not here and enjoy flicking back through our full sets of Jalopy (yes, I even have all of the A4 editions from late in the life of that most readable magazine) as much as we enjoy looking at the current editions of the magazine that inspired this forum - and which is itself a champion of unexceptional vehicles whose significance is more related to their nostalgia value than to their investment potential.
Fort me, seeing that (Snapdragon?) early Metro

triggers much emotion since the car that my late mother bought - split new, from the main dealer - in 1981 (KJR***X, a 1.0 L) was finished in the same shade and was still on the road as recently as 2003 thanks to Dad's insisting that it be practically drowned in Ensis V before it went anywhere near the road. And then its demise was caused not by rust, but by its second keeper's fondness for driving like a complete twunt and using the rear of a Vauxhall Vectra as a solution to severe brake fade.

Not until the arrival of the facelifted version of the 1st generation cars and then on the 2nd gen ones without the bonnet hump. On earlier cars tyres were 135/80r12 on basic, L and HLE, 155/70r12 on HLS, VdP and MG models. Very late GTAs - immediately before the K series engine and interconnected suspension (each side on the K series cars, A series cars had the rear bottles linked, but independent front ones) came with a low profile 13" tyre as standard, replacing the TD. Many late cars now wear 13s with low profile tyres and no, the K series cars had the Triumph (3.75" PCD) hub pattern so their wheels are no use for A series Metros. Shame, I so wanted the later cars to have some use other than wheel donors for Triumphs and Marinas - both with thick spacers and spigot rings.

Sugar coat, is that what you call that duck egg yellow. It looks like someone has had a skinful of eggnog and then the car has ended up wearing it. Imagine the hangover!

Some of us were around for the launch, when The Metro was backed by a jingoistic advertising campaign; extras waved the Union Flag to maritime music, as flotillas of foreign cars were forced back into the Channel by a phalanx of Metros and the tag read “A British Car To Beat The World."

Still, it worked on the gullible, as the Metro became the best-selling small car of its day. And that was despite it being fitted with Austin’s dated A-series engine and four-speed gearbox (as used in the Mini) at a time when rivals were using more modern motive power.

Updates would come in time, but even from the off the Metro proved to be popular thanks to its blend of space and affordability and not forgetting that even car thieves have standards. By the time production was called to an end in 1997 due to poor crash test results, Metro sales, including MG and Rover versions, had exceeded 2 million.

So, apart from it's dodgy mechanicals, what went wrong? Well, as with all British Leyland products, the Metro’s reputation was undoubtedly tarnished by prevailing images of angry strikers standing around a burning brazier somewhere in the Midlands. But perhaps the biggest problem was the fact that it was sold for too long and its styling, if you can call it that, dated in a way that the Mini’s never did.

In 1987, British Leyland was forced to cancel a Metro replacement because it couldn’t afford the development costs. Instead, it introduced an uprated Metro in 1990, which featured the more modern K-series engine. And by the time the car was re-badged as a Rover 100 in 1994, it looked about as contemporary as the average stegosaurus.
Top

I’ve got to cough to an All-aggro. The only car that I made a profit on ....there’s a story coming on....don’t regret getting rid though, so ‘off topic ‘

In my youth i had several aggro's.. great little cars. Although mine didnt age very well, but that's probably due to the abuse and general neglect and me thinking i could drive like ari vatanen..
Top

Are you unwell? Shall I call a doctor?
The Austin Allegro has been voted Britain's worst-ever car. The much-derided British Leyland car - often referred to as the 'All-aggro' - beat the Morris Ital and Talbot Sunbeam to the top spot in a survey carried out by internet magazine iMotormag. The car was launched in 1973 and, with gimmicks including the square steering wheel, quickly gained a reputation for poor design quality. Despite this, 642,350 Allegros were sold. 4,000 motorists took part in the survey with 24 per cent saying the Allegro was the car they would least like to be seen driving - even though production ended 25 years ago.
Of the six hundred and forty two thousand, three hundred and fifty sold, only Dick liked his. At www.giving,com you can make a donation towards Dick's therapy. Progress has so far been Aggro-vated, but doctors are hopeful.
Top

Seriously mate my family had at least 6 aggro's... true they didn't age well but they were cheap and cheerful and could leave the twats in the ford clitoris in a cloud of blue smoke and dust

Users browsing this forum: No registered users and 9 guests