What would you buy & why?

Here's the place to chat about all things classic. Also includes a feedback forum where you can communicate directly with the editorial team - don't hold back, they'd love to know what they're doing right (or wrong of course!)
Post Reply
1058 posts
Message
Author

Still waiting for the pics of your new toy John, are you feeling better now?
Top 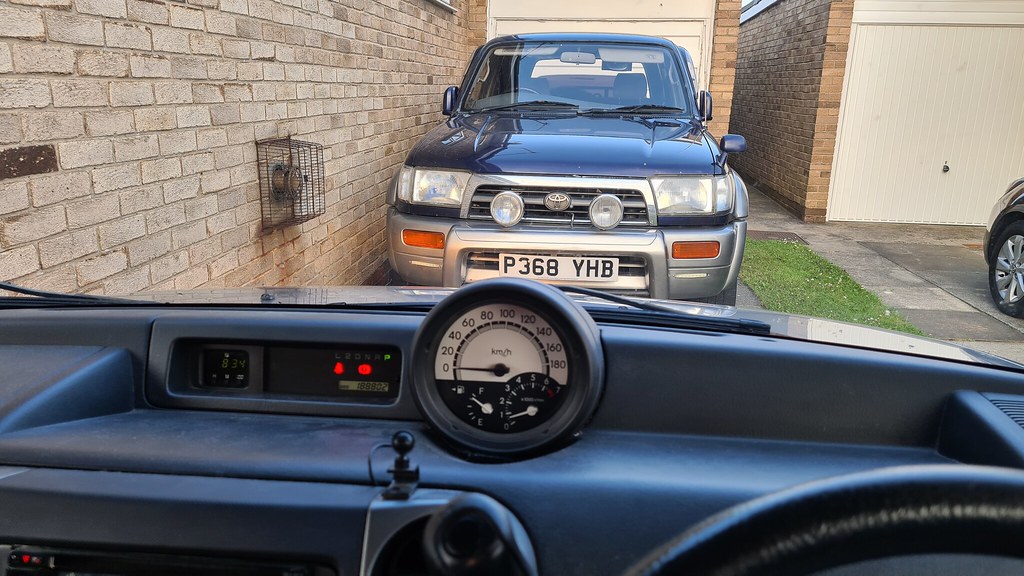 I had to get myself out to the hospital pharmacy yesterday so started the bB for the first time in ages and drove myself there (some 35KM) with my left hand operating the footbrake pedal via a walking stick, some Meccano and a spot of luck in that this arrangement worked really well, largely thanks to the fact that the bB's larger brake pedal requires ridiculously little effort to stand the thing on its nose and that the smaller parking brake pedal wouldn't be needed as the parking pawl in the gearbox works just fine, left foot on the accelerator of course, as I often do this when necessary and am used to it.
Unsurprisingly, the smaller Toyota started without any bother, completed its task in equally undramatic fashion and generally drove in a way that makes it hard to believe that this car has now covered some 188000+ KM (you can just make out the odometer reading in the photo, taken from inside the car) and that I've owned it for five years now. It's actually the only vehicle I've ever owned that has never, not even slightly, let me down, only ever needing its services and a new aircon compressor in the 70000+ KM that I've covered in it since 2016. The engine never ceases to surprise the chap who does the bulk of the service work at the Toyota specialist's place as it always drops the same amount of Mobil 1 5w30 at an oil change as was poured into it at the previous one, no thick oil needed for this one as it ages, that's what happens when a manufacturer assembles the engine properly at the time of the car's build. Sometimes, when I've just switched it off, I hear gurgling sounds from the engine bay, but the resulting panic is short lived when I remember that this phenomenon comes about as a result of my forgetting to switch the air conditioning off before switching the engine off.

As for the "new" Toyota, it's a bit of fun that's an interesting alternative to the manufacturer's own Land Cruiser Amazon, whose body is neither more nor less than a wider version of the Surf's hardly slender one. The Land Cruiser, HiAce 4x4 and pickup versions of the HiLux all share components such as chassis, suspension (with various differences over the years), engine ranges available and much of the electrical stuff, so parts are inexpensive, freely available - exceptionally so for a grey import - and invariably easy to fit as required, with the exception of the van's engine bay area, where the cab seats are where the bonnet is on the Surf.
I'm liking the way that this mahoosive old thing drives too. It's not as refined on road as a Series 1 Discovery, this in spite of the Toyota's independent front suspension, but it's not far off the Disco's levels of off road ability and at 24 years of age, and in spite of having come to the UK in 2003, this addition to my fleet has a most un- Discovery 1 like amount of body rust. There must be some, but as yet I haven't found it and that massive chassis is unwelded, though did pick up an MOT issue on a very Discovery like spot of corrosion in the steel sleeves that go through the centre of a couple of its body mounts, even though, again much as is true of many S1 Discos, the chassis itself is unwelded and not showing any signs of needing to be repaired any time this decade. At 263000 KM, the interior of my new toy is remarkably clean and undamaged, with the exception of a couple of boulder burns to the driver's seat, easily addressed by a spot of upholstery fettling involving taking tiny patches from the folded over edges of the seat base cover and stitching them into the holes. The interior isn't yellowed and doesn't stink of smokeing, so how that came about remains a mystery, but again, on interior durability, this thing is at least a match for a similarly high mileage Disco such as the one I owned.
Would I swap this for an equally well preserved and dependable 300TDI automatic (or a 200, but they're getting pricey now and tend to be saved by enthusiasts rather than driven into the ground as feed vehicles for the local hill farmers during the winter)? Of course I would! But the fact is that the HiLux is a very fine device in its own right so the chances of my owning another Disco are pretty remote, even though my 298000KM imported one was a very dependable thing and being a Japanese example, rust free if rather scruffy on the outside as well as assembled properly from the kit by the Japanese importer when it was new.
Would I swap the new 4x4 for anything other than another Toyota or a Disco 300TDI auto? Not bloody likely, I'm done with buying stuff on a whim and getting away with it.

Hi chaps, im about to receive some money.. before I waste it all on things that need replacing can you suggest something like a cross between sd1 vitesse & xk8? Needs to carry 5 ive been told so my plan for another mr2 have been banned by wifey...
Top

Buy an old Mercedes pre-Sprinter van, the sort of tough old thing that Zel's motorhome is based on, and shove loads of beanbags and other soft furnishings in the back so that your children don't get too badly hurt if you have a crash.

Or buy a Maserati Quattroporte which must be one of the most practical cars ever built for a family and may look slightly better than the Benz when parked outside your favourite restaurant or at your golf club.

From that two, the van is, in my opinion of course, far the better vehicle to own, because Mercedes-Benz. Who on earth are Maserati anyway? Pah.
J
"Home is where you park it", so the saying goes. That may yet come true..

Maserati, nice idea but well out of my budget plus my friendly mechanic has told me if i get one, he won't be working on it..thats the polite version... Mercedes van, i have my eye on a 20 year old vito with about 75k but its not for sale yet...
Top

Early Jag XK8. I've got one of these, but a MY2001, so later "facelift" version. A lot of car for the money (usually, in the UK anyway) and a lovely thing to drive. There was a long list of "known problems" with the early ones though, which this is. Amongst these the most serious is the possibility of having Nikasil coated bores in the engine - sulphur in the fuel breaks the coating down and wrecks the engine - it's not fixable, it's new engine time. If it hasn't already had a new engine (most have by now), walk away. Also early ones had plastic timing chain tensioners, which break and the chain slips, with all the amusing consequences of a broken timing chain/belt. They need to be replaced with the later metal ones which are fine. Also had problems with excessive wear on the gearbox clutches, and the impeller on the water pump can come loose and overheat the engine, both of these are less common but do have upgraded parts on the later cars. Also check for rust on the floorpan in the driver and passenger well - check from underneath, there's a bracket that was used in the manufacturing process that does absolutely nothing, except it rusts like mad as they never painted or sealed behind it. I cut mine off, and it's fine now. Wishbone bushes on the front don't last too long, check they're in good nick although not the end of the world to change. Lots of electronics too, so make sure everything works. Tyres are expensive. Check the heater works properly and blows really hot when asked to, there's an auxiliary electric pump for the heater matrix which can fail. When I bought mine I checked out ALL these things and they've all been sorted, and so I've had very few problems with it to be honest, but you do need to know your stuff before plunging in.

Basically if you read up on the "common faults" on these you'll find all this stuff and more. If you get either a later one that has all the upgraded parts or an earlier one that's been properly sorted then they're a great car, but if you don't then you could be in for a money pit at best.

Some people are like Slinkies - they serve no useful purpose, but they still bring a smile to your face when you push them downstairs.
Top

Thanks for the info mate, im not in any rush at the moment.. still its nice to look

Users browsing this forum: No registered users and 3 guests