Post pictures and stories about your cars both present and past. Also post up "blogs" on your restoration projects - the more pictures the better! Note: blog-type threads often get few replies, but are often read by many members, and provide interest and motivation to other enthusiasts so don't be disappointed if you don't get many replies.
Post Reply
111 posts
Message
Author

Loving this, what do your neighbours think of a tiny old ford?
Top

None of the neighbours have seen it yet I don't think. If they have, they haven't commented!

Had a police officer come out yesterday for the vehicle inspection. Now I have that form I can go to the BMV and hopefully get a title. I have everything I need but you know what people are like. I remember when I went to get my drivers licence here they were close to not accepting my birth certificate because it had English and Welsh on it (I was born in Wales). I had to tell them that not every country does things like America, and if they want an American style birth certificate then I'll have to time travel and be born in America!
2013 Dodge Durango R/T
1965 Ford Anglia 106e Estate (Wagon). LHD.
1964 Ford Anglia 105e Saloon
Top

Not entirely related but back in 1980 I had to work in Cape Town for a few weeks but that was not long enough so I had to get my Visa extended.

Showed the paperwork I had to the lady behind the desk who took a quick glance and pushed it back with a set of forms and grunted "Fill this in in triplicate" .. on getting no response to "Do you have any carbon paper?" I realised she meant fill in THREE forms ... then I had to re-do one as she didn't think one signature matched!!

And I was there to install a computer in a subsidiary of my UK company .. should have looked for IT work for the SA Government, especially Customs and Immigration!
"If you're driving on the edge ... you're leaving too much room!"

I went to the DMV first thing this morning so was first in line. By remarkable luck the lady I dealt with was the lady who deals with all the import paperwork at that office. Conversation went like this:

Oi! Whose been giving my photos to the press?

The weather is holding for now, we are getting frost in the mornings but they haven't salted the roads yet so I'm trying to get as much use out of the Anglia as I can. I decided yesterday to take it on a run to the tip to dump some cardboard off and ventured about 10 miles from home then came back. 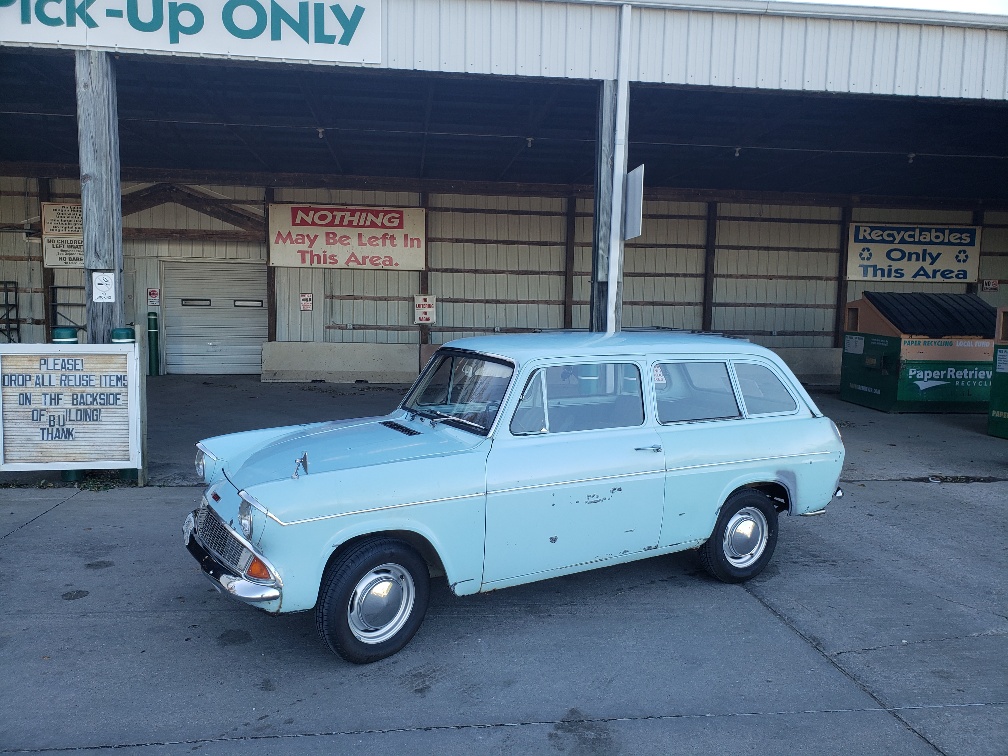 Performed flawlessly, which I knew it would given my dads attention to detail. I have a complete set of engine gaskets on order as my brother said after they changed the oil the front timing cover was leaking, along with the rocker cover. Interestingly the timing cover leak appears to have stopped now it;s gotten good and hot. I took this photo today, and prior to my run it was a lot wetter: 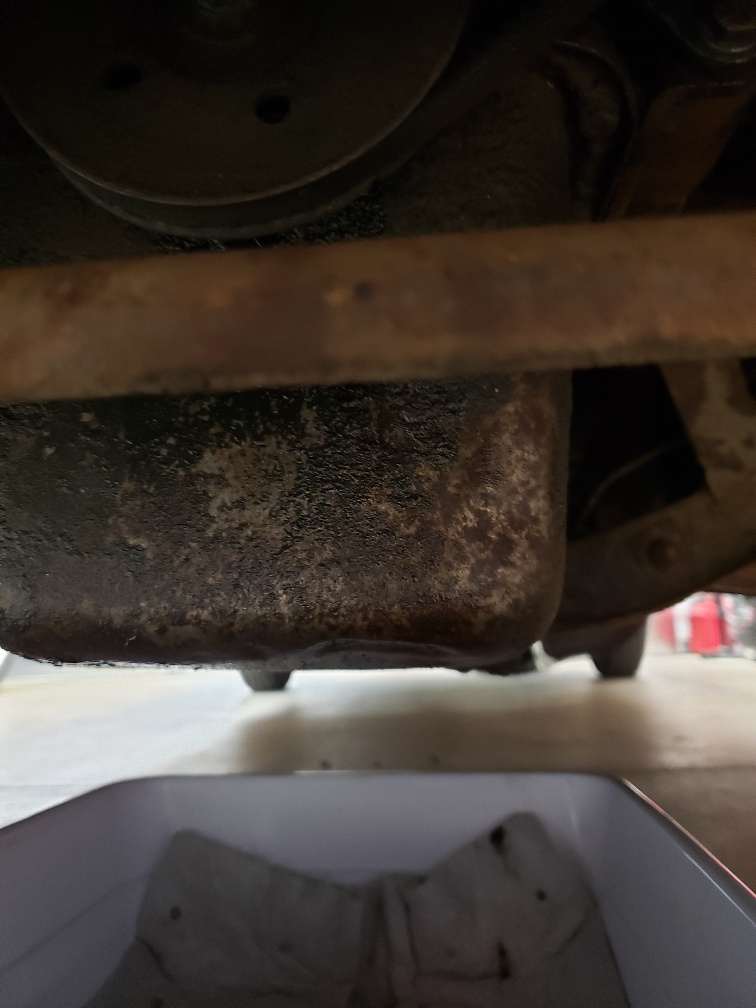 Have a weep from the rocker gasket which is expected. I'll probably just nurse it for the next few weeks as they are available in the US but expensive, so I'll just wait for the ones I've ordered from the UK to come. I'll have plenty of time over the winter. 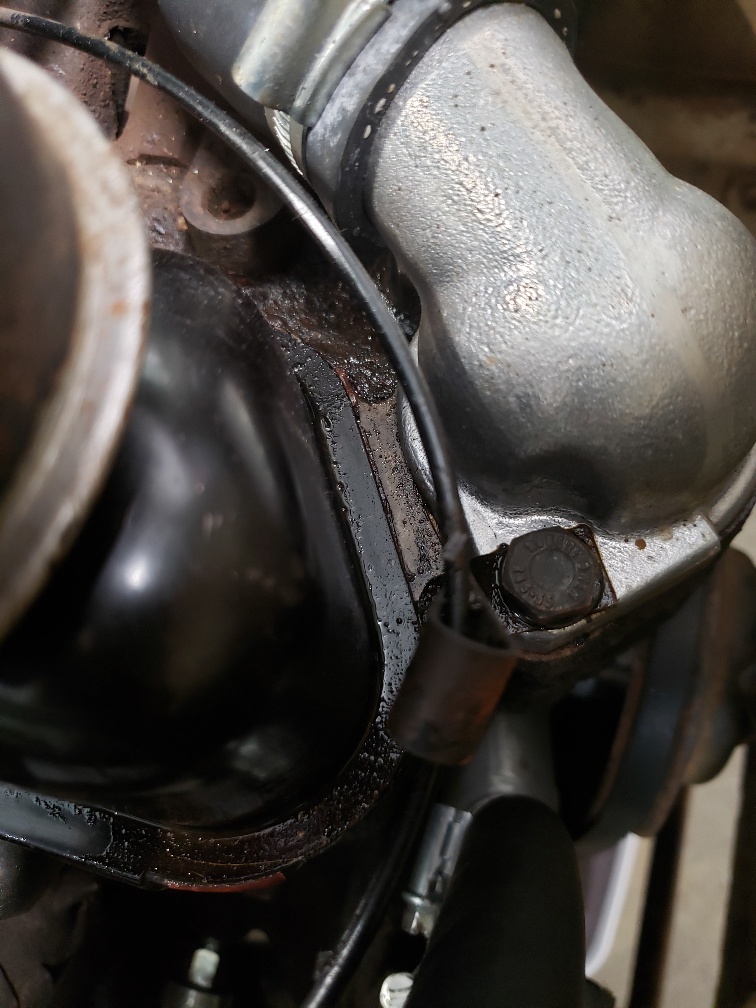 Getting ready for thanksgiving here, so have family down for that. I took time to swap the instrument cluster over to an MPH one. I tried to get the odometer wound back to the correct mileage but the closest I got was 41k (should be 39 ish K) 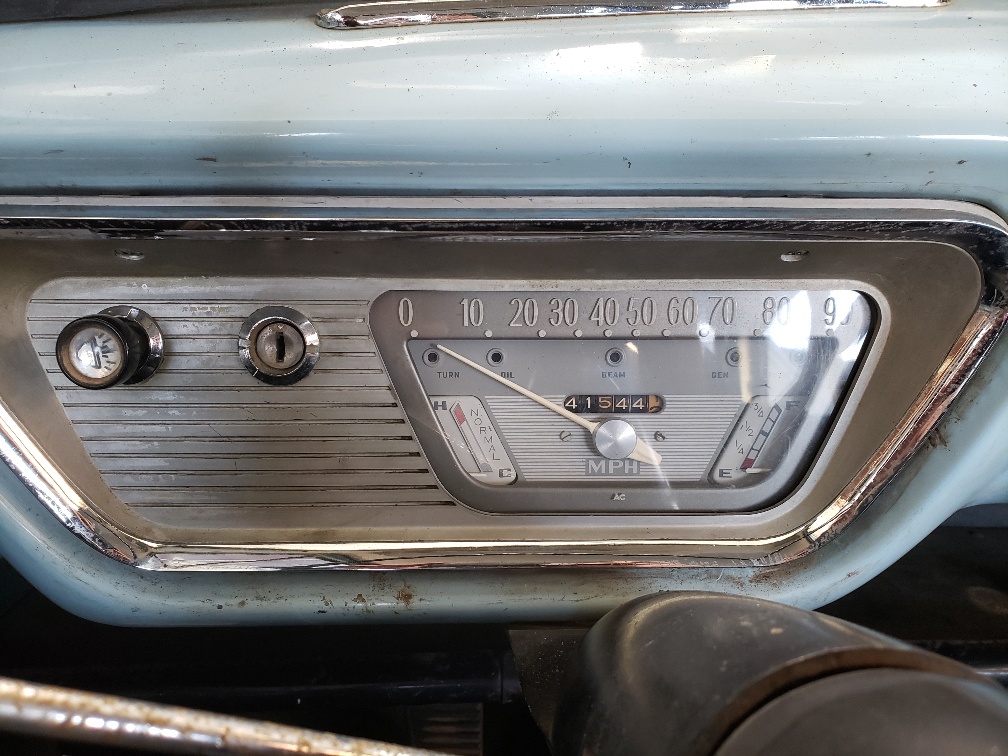 Interestingly you can actually just swap the glass over between the units and the speedo needle will line up with the corresponding marks (30mph/50kph). What no-one in the club has told me yet is what is different with the ODOMETER because obviously that reads in KM. I have bought a used spare MPH unit so over the winter will dissect both. I suspect there is just a different number of teeth on the drive wheel for one of them.

I also noticed this on the rear of the removed fuel gauge. I asked and the response I had so far is 'The estate and saloon had different voltage units'. The new instrument cluster works just fine in the car, the temp gauge reads the same as the old, as does the fuel gauge so I can't believe a car in the 60's would have had different systems for a saloon and estate. At worst I can swap the gauges into the MPH speedo. 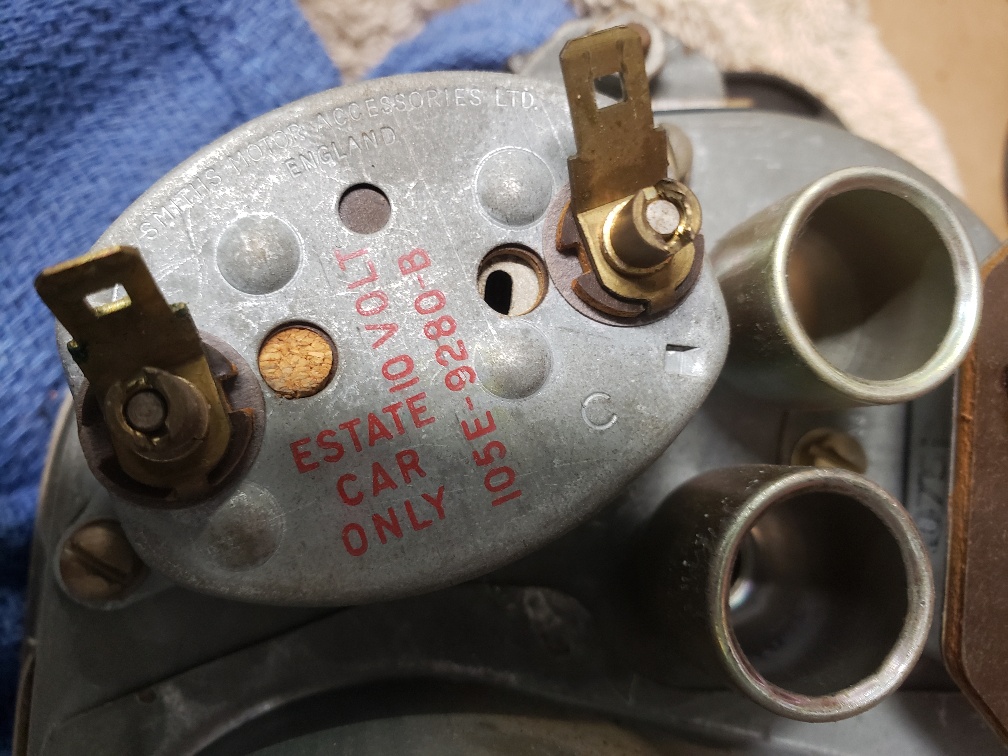 My visiting mother in law made a blanket for the back seat: 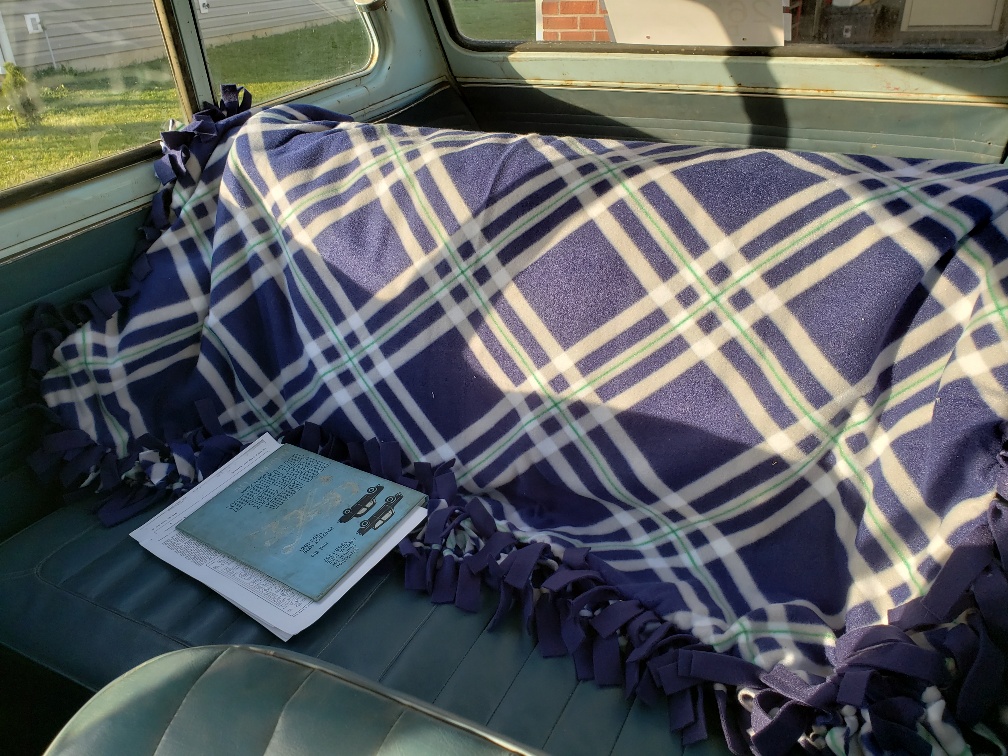 I took it out on Saturday for a date with my wife. We went to a drive through starbucks and were sitting so long it got a little hotter than usual, but all seemed fine. The years of accumilated oil leaks are burning off every time I got for a drive, so it's a bit smelly though I intend to take it to the pressure washer this week before I park it up for winter. I suspect the engine isn;t in the best of health as it's a bit smokey and when warm, takes a few seconds to build oil pressure after starting. I put it to work again to go buy some firewood for out fire pit 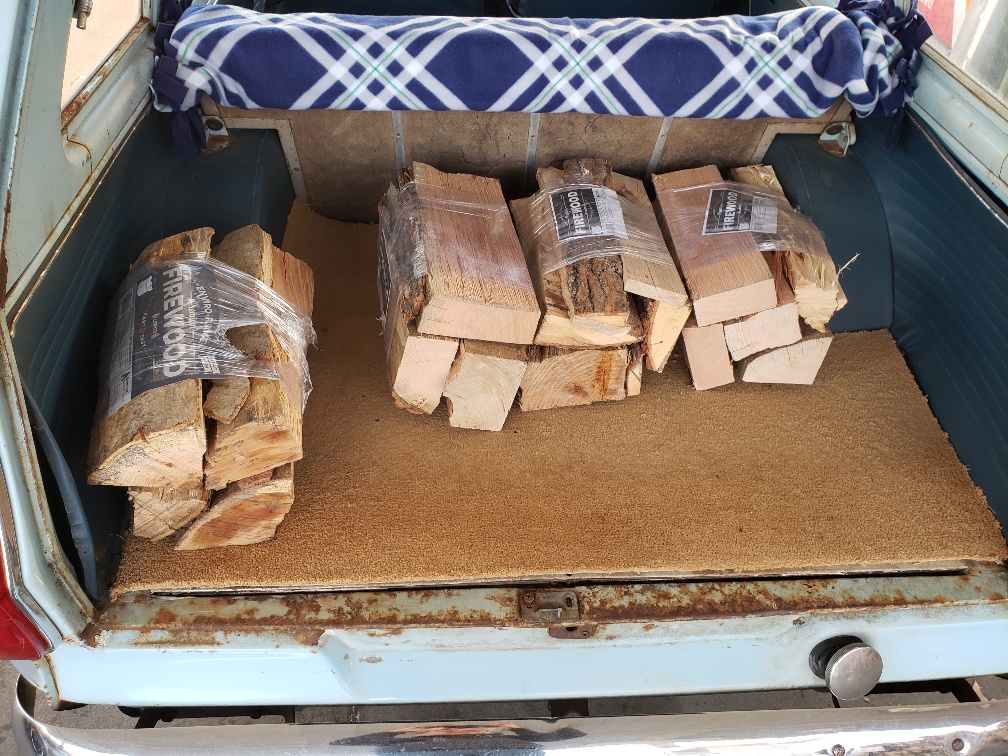 I thought you'd get a kick out of this picture: 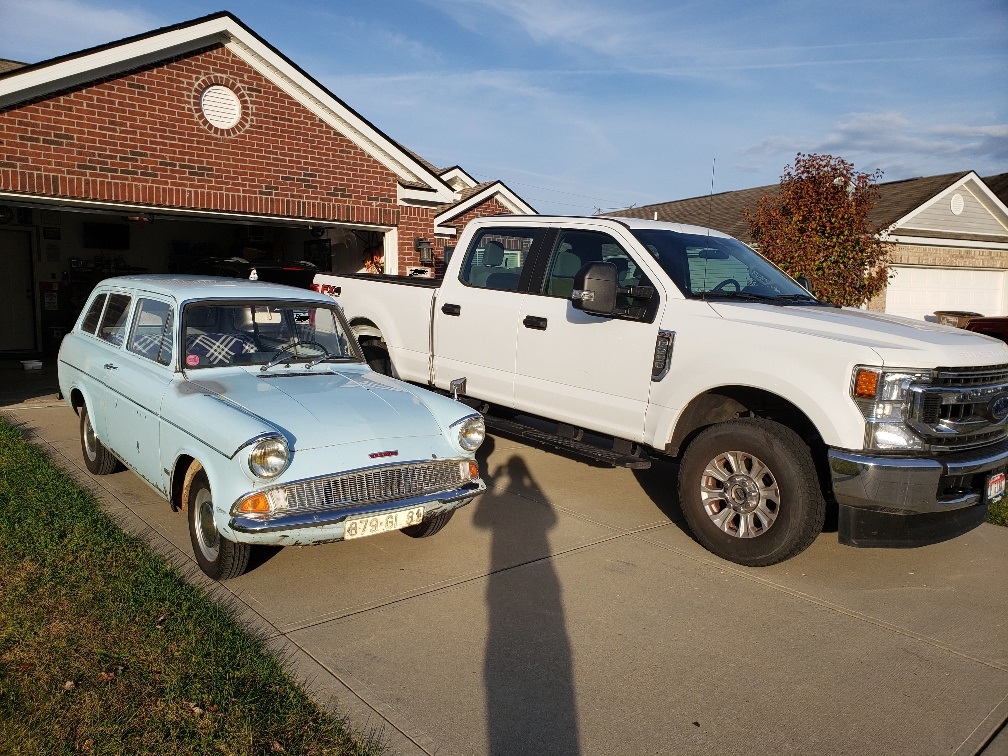 Finally, I addressed the loose bottom of the passenger front wing. It wasn't attached to the sill (and I found no welds indicating it was ever so). I didn;t want to weld it back on just yet as it is useful to get behind there for cleaning and painting during restoration. 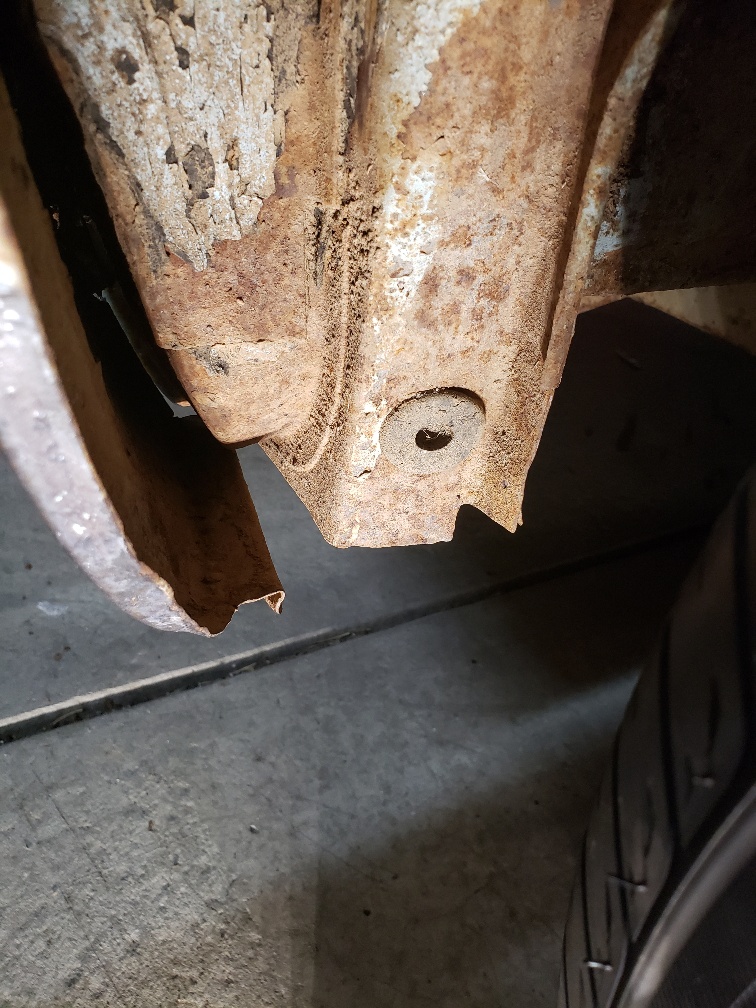 So I clamped it on and decided to drill 3 small holes for screws that can later be used as tack welding holes. 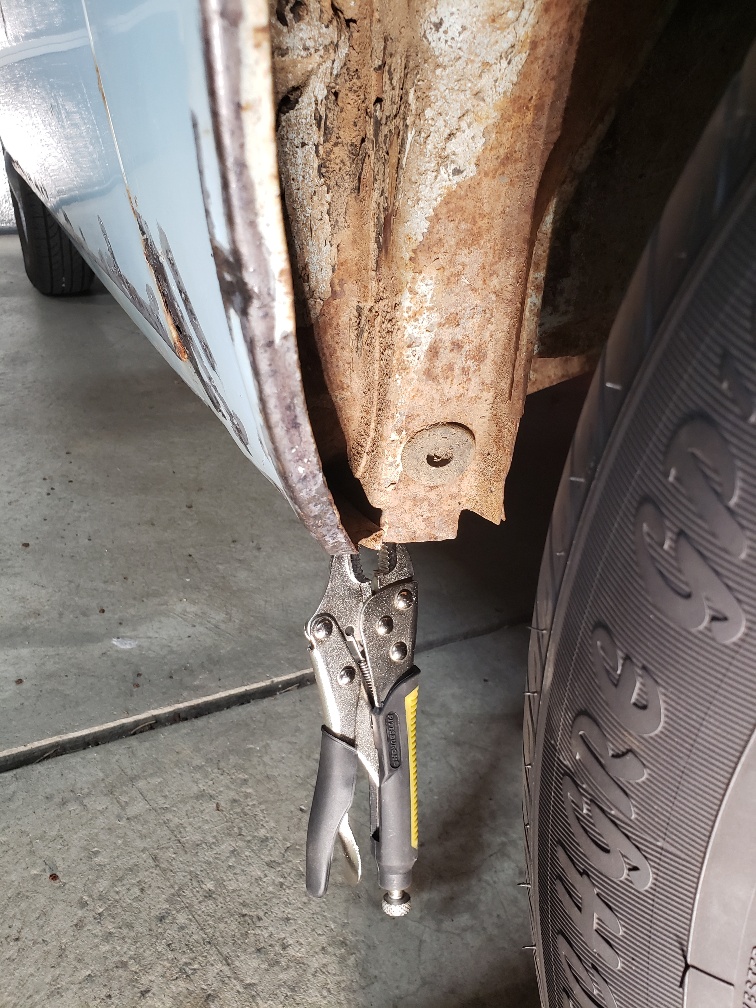 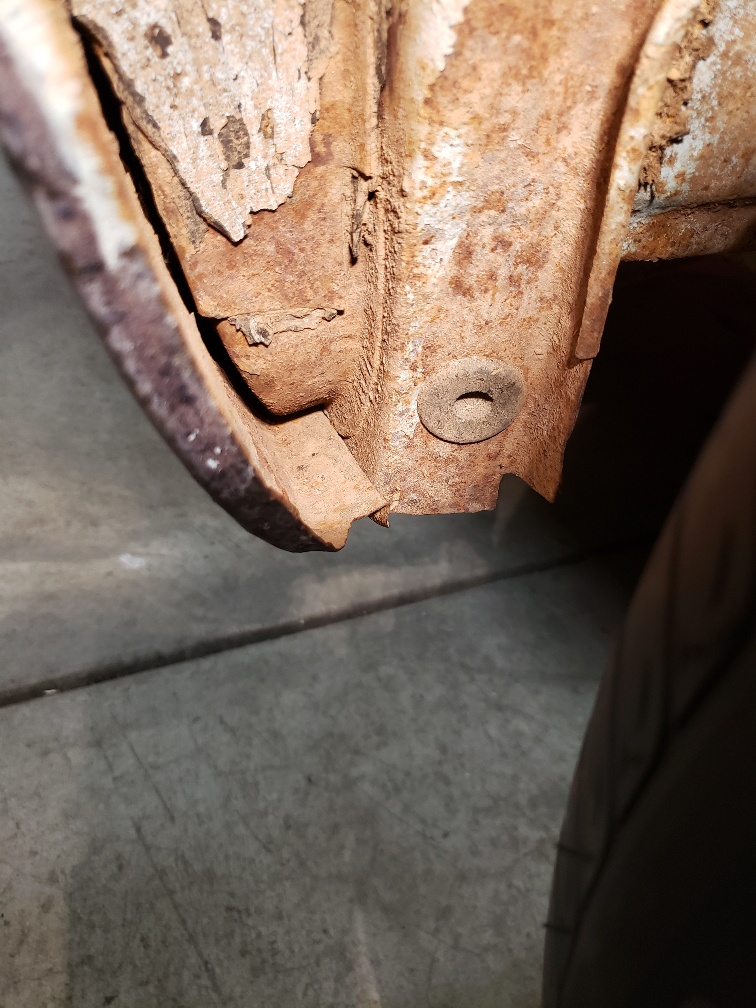 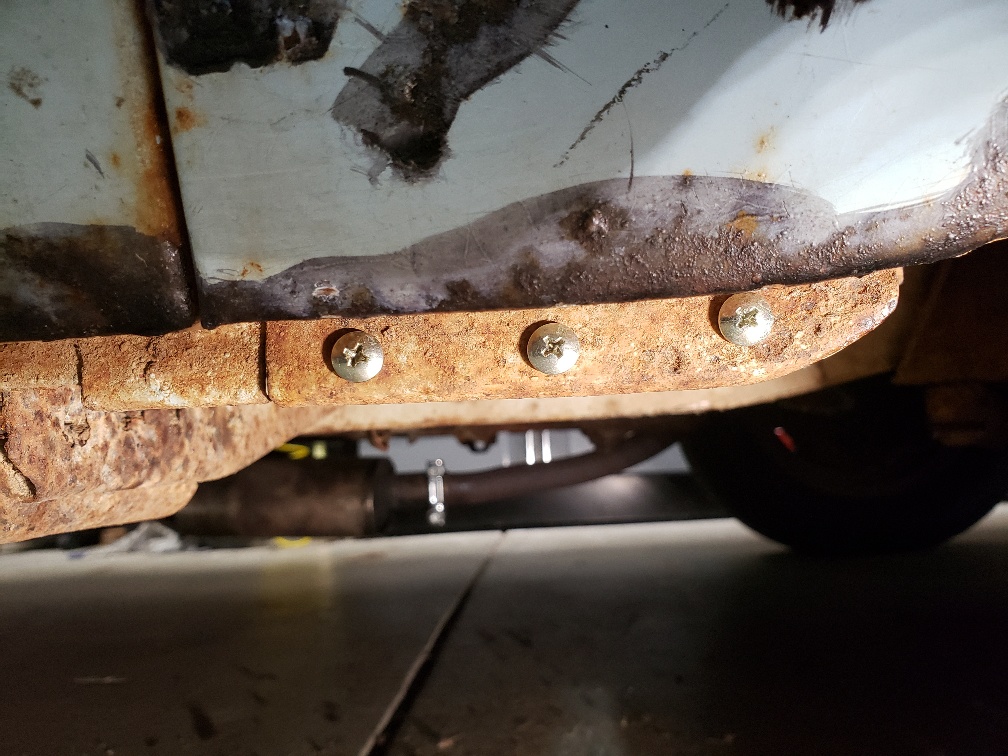 Wednesday was my last day of work before Thanksgiving, and I had to pop into work to check on an engine build (I work at Cummins) so I decided to take the Anglia. I did 52 miles! After work I took it to a jetwash to clean the underside, and it came out pretty good: 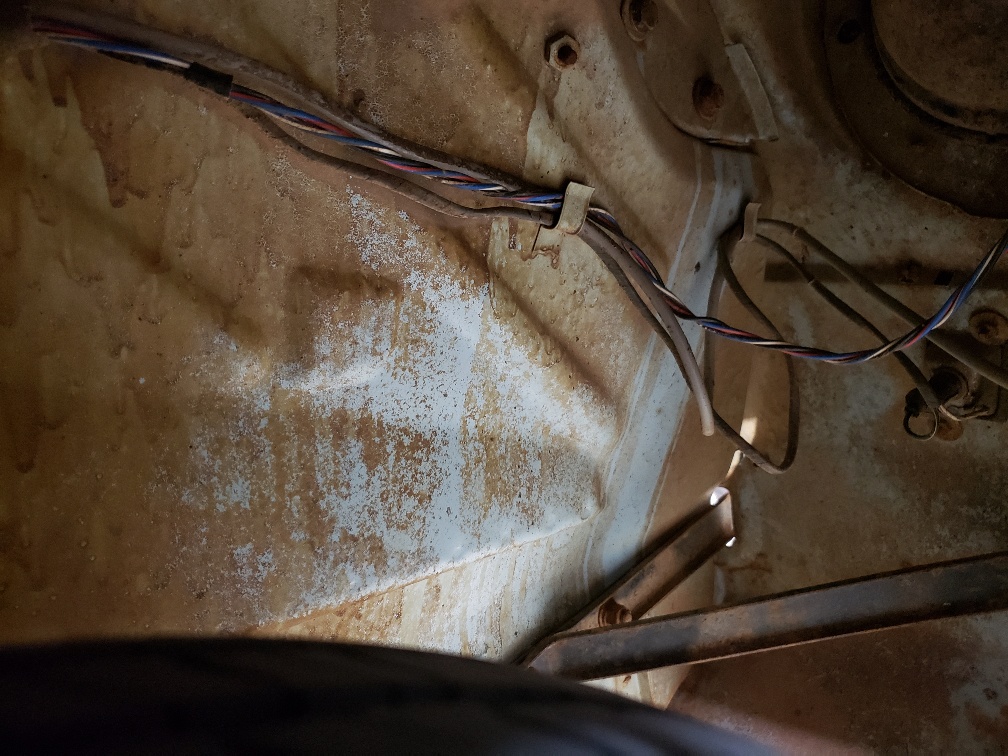 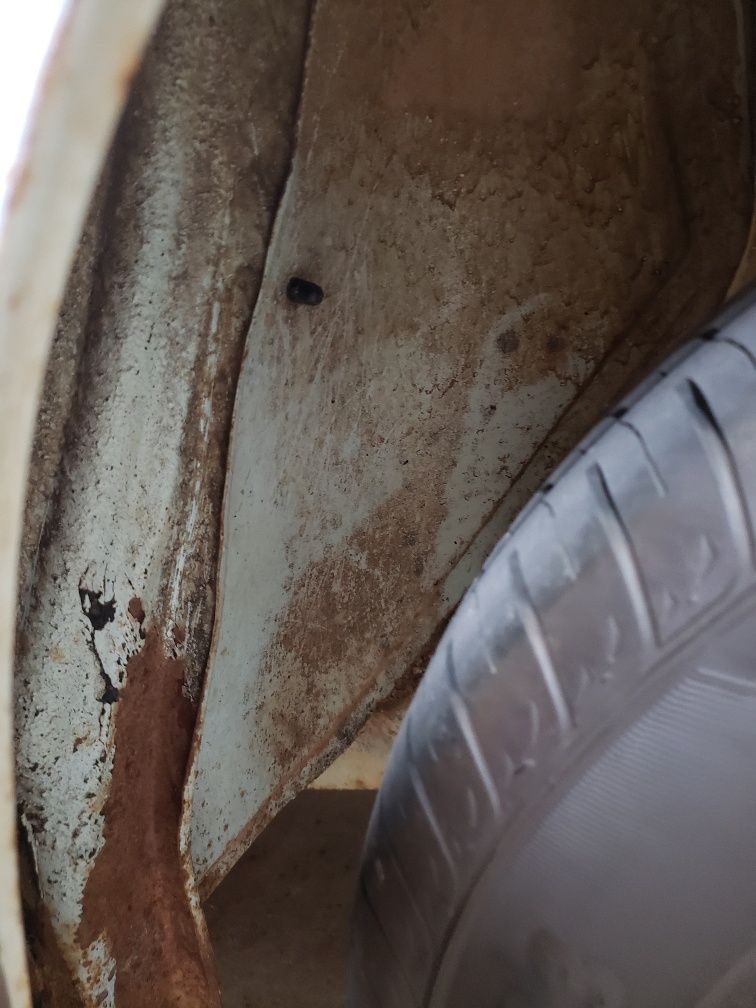 However, I must have gotten something wet as it didn't wan to start after. It would run a short while then stop. Eventually it stayed running and I took it to a petrol station to fill it up with ethanol free fuel and added some Stabil for the winter layup. About 1/2 a mile down the road after filling up it conked out again, but started up right away and drove home fine. So I'm guessing I just got some electrics wet. Rocker cover leak got worse as expected but I found over here you can get rubber ones so I will get one for replacement.

Aside from fixing things like oil leaks, cleaning the car up and replacing suspension components that are worn out, I think the main task this winter is going to be to remove the rear axle, clean it and paint it and paint the underside with POR-15 as far forward as I can. There really isn't much under there, and thankfully just light surface rust/crud to clean off. 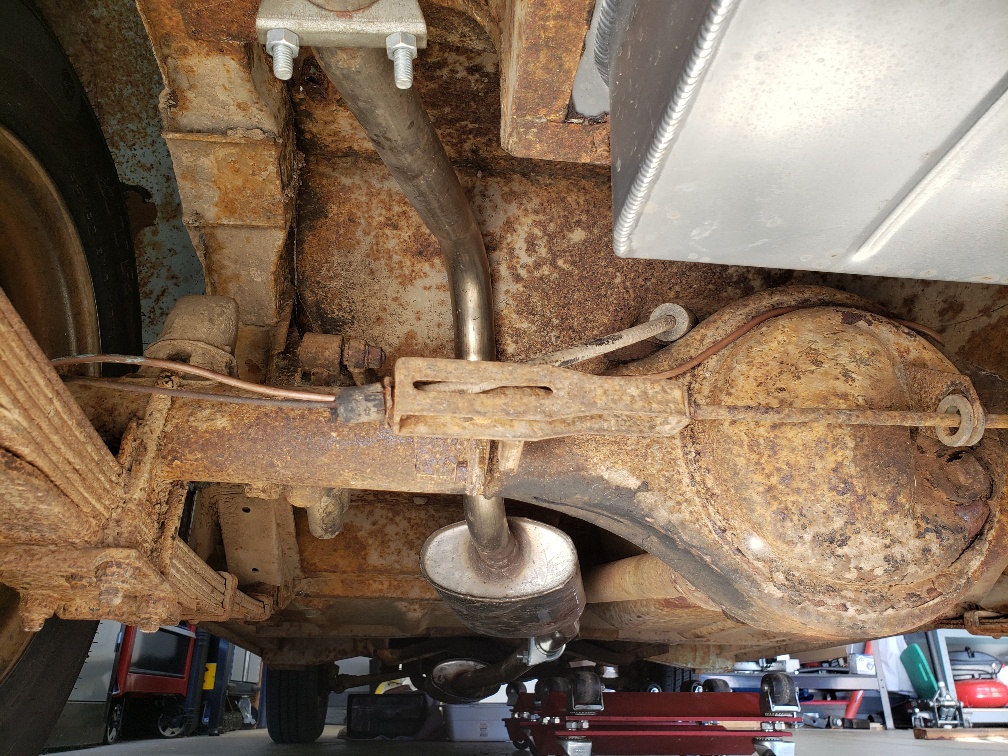 Regarding wheelarches, you can see they have the original paint mostly so I want to preserve that. I think I may touch up any needed parts then paint them with a clear coat to keep the original patina.
2013 Dodge Durango R/T
1965 Ford Anglia 106e Estate (Wagon). LHD.
1964 Ford Anglia 105e Saloon
Top
Post Reply
111 posts