Something a little different 'bloggy' & not quite classic!

Post pictures and stories about your cars both present and past. Also post up "blogs" on your restoration projects - the more pictures the better! Note: blog-type threads often get few replies, but are often read by many members, and provide interest and motivation to other enthusiasts so don't be disappointed if you don't get many replies.
Post Reply
50 posts
Message
Author

JPB wrote: ↑
Mon Dec 03, 2018 7:11 pm
OK, so chances are it's too new for you & probably for the world in general, but it's small enough to hide from Mrs Rich - maybe in a spare kitchen cupboard in your luxurious French château home - and let's face it, if she found out that you'd spent that much on a vehicle you don't strictly need, at least you could live in the thing.

You're forgetting something John, Rich has a hotline to "The Stork" his brood would squeeze into the Mazda, what he needs is to think big:
https://newatlas.com/variomobil-signatu ... 9/#gallery
Top

but as ght said i need room for the tribe..
these are on my shopping list now

Well out of that bunch of dogs, I'd have one of the Jack Russell pups!

They're charming beasts, but don't let them think they're in charge, they're clever wee blighters so they need to be trained thoroughly, indeed they thrive on learning. My nearest neighbour has a 4 year old one and she (the doggo, not the neighbour) is a delightful character whose footballing skill is remarkable, as is her ability to bring a smile to my face even in the worst of times.

Once home I moved onto to getting the new toilet 'flap' thing fitted. This meant removing the bowl. The flap mechanism and pedal are attached to the underside of the bowl. 8-10 screws hold it on. Nice and easy then?
Well the bowl sits on 2 studs. One at '5 O'clock' and one at '11 O'clock. '5' is easy but '11' requires working by 'feel' as its right over the back of the bowl with 'knack all' room to spare

Also had to disconnect the flush water pipe, again this is a work by feel one.

Re-fitting was a real ball-ache. Worst part was getting that flush pipe back on.......
The job was done (I thought) and so we headed off for a long weekend. During the trip that flippin' flush pipe 'blew off' causing a bit of a flood in the bathroom

.
Had to divert to a Castorama where I got a blank to go on the end of the pipe. Fitted that in the car park. So water was restored, minus the ability to flush. Bring out the bucket!

Once home I had a fettle with that pipe with everything drained down. No way could I get the blessed thing to screw onto the back of the bowl.
So I set off the Mr Bricolage nearby with the 'offending' connectors to see what I could find. These. The brass bits threaded bit into back of loo & the grey bit to secure the water pipe......
At the DIY place I collared the plumbing dept chap. He took one look at the gubbins I had and declared it to be from a camper van! Impressed I was. He then sorted me out with a great solution to sort everything. 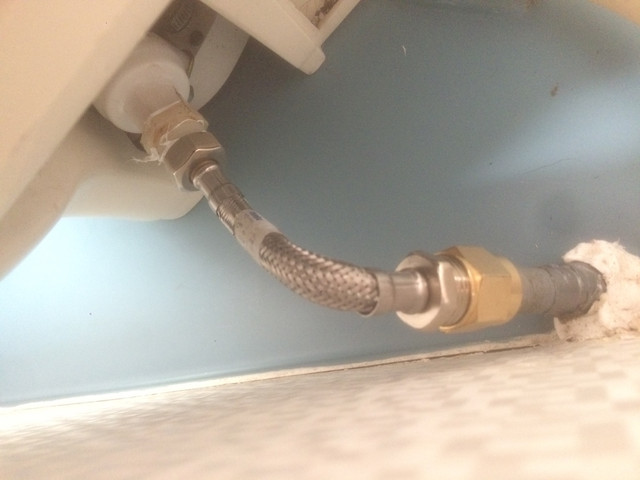 This being the fix & its been fine ever since

Moving on to the next 'big trip' for The Jalopy. similar to the last one, visiting the 'crinklies'.
Southern Brittany to Calais (tunnel).
Folkstone to Belper
Belper to Silloth
Silloth to Belper
Belper to Oakhamton
Oakhamton to Weymouth
Weymouth to Folkstone (tunnel)
Calais to Southern Brittany (home).
Lots of stop-overs of course & with running around these trips are 2-2.5k miles.

All was going so well. TJ flew (well not quite

) up to Calais. Then began the trek heading northwards. Bowling along the M20 around 65-70mph & BANG. What the ......everything felt right after, but had eased right off the gas. A passenger in a car passing was pointing down to the right front wheel. Limped onto the next junction which fortunately was very close. Pulled over to find: 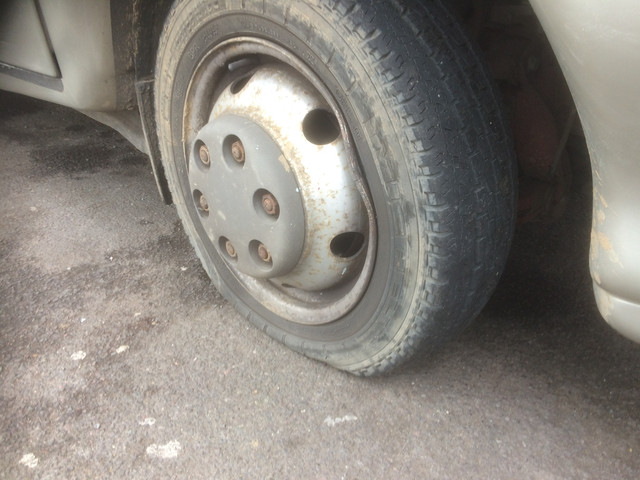 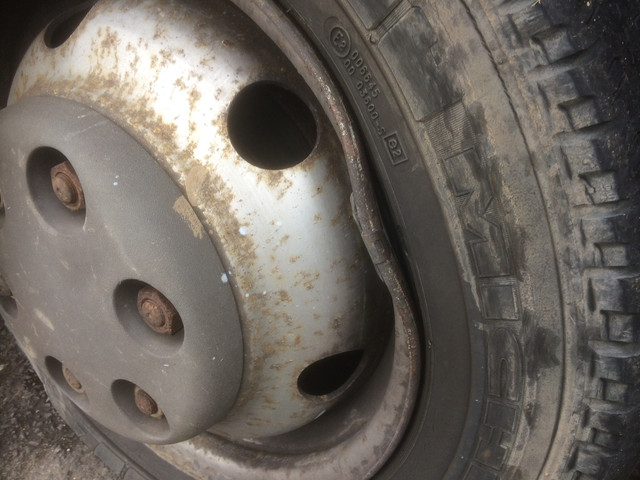 One of the 'many' who had hit a pothole then, great!

I went to get the supplied bottle jack to change the wheel, but found it too high to go under the sub-frame, presumably due to the flat tyre.
So onto the French breakdown then. Well, chocolate teapots are more useful! We were on the outskirts of London, but they could not find a recovery - they insisted that it had to be an Iveco garage & that there wasn't one anywhere near

No matter how many times I explained that any garage could sort it they continued that Iveco's go to Iveco garages & Fords to Ford...... yes they really are that 'blinkered'. In the end I said I'll sort recovery & send them the bill once back in France. This they agreed to.
So I found a garage. They sent their recovery chap & told us to drive to them afterwards for a safety check. Sure enough, the chap arrived. He struggled to get his heavy duty trolley jack under, but lifted it a bit further aft. Then put the spare under the centre of the sub-frame. Lowered it onto the spare. This held it high enough to get the jack under the frame near the offending wheel so he could change it for us.
He then led us to the garage.
These guys were brilliant. They took TJ straight in & fifteen minutes later confirmed zero damage (save for the wheel). They put some air in the spare and said we were 'good to go'.
Great except we were now 3 hours behind

Oh I said these guys were brilliant, guess what when I asked to pay - no charge at the garage for the safety check. Recovery call out of 60 quid. I took the bill to send to the brake down company.
We set off once more. But didnt get to Belper as planned as it got too late. So found a little site on a farm, I think in Warickshire. Next morning continued up to Belper with no issues. What a day that was!
Paul240480
http://www.gitessouthbrittany.com
Top

Once up in Silloth (again) with a few weeks at hand. I asked on the Silloth Facebook page for reccomendations for a place to straighten the wheel and sort me a couple of new tyres.
I received a number of tyres and plumped for one called Robinsons Car and Commercial. Based in the old control tower of the old RAF base (WW2 base).
They got on with it, but found the left hand front wheel was seized, the brake calliper I mean.
I nipped down and sure enough it was seized

.
They said they could most likely be able to clean and free it up. I asked them to fit mew pads on the fronts too.
This they did, they said they'd fit a mid price pair of tyres. These turned out to be Jinyu ( never 'eard of em).
The morning we left the aux belt or one of its pulleys or the viscous fan was squealing. I gave it a small spray of silicone , that silenced it immediately, but I guessed it would raise its ugly head later.....
The remainder of this trip went perfectly with The Jallopy just munching the miles

The Jalopy has spent the winter resting, with a little heater on frost setting and everything drained down.

Went in for French version of MOT last week, FAIL!

It spat anti-freeze all over the place from the overflow pipe, which pissed off the tester

So the fluid, my fault for brimming it I think. It normally settles to mid-way between min and max. Should of left it be.

Rear brakes, well my mobile mec popped over and found the pads are delaminating on the offending side. Calliper is good, phew!

For the ball joints, mec said he can't do them as hasn't got the kit to press them in/out. Reckoned Iveco garage was the only option...... That said I phoned a local HGV garage who in turn advised another local place. Waiting for an estimate from them now. If they can't do it, then it'll be mainstealer, eek!
Paul240480
http://www.gitessouthbrittany.com
Top

The Jalopy now has a fresh ticket, so 2 yrs worth

The ball joints were just the smaller ones of the 2 each side. 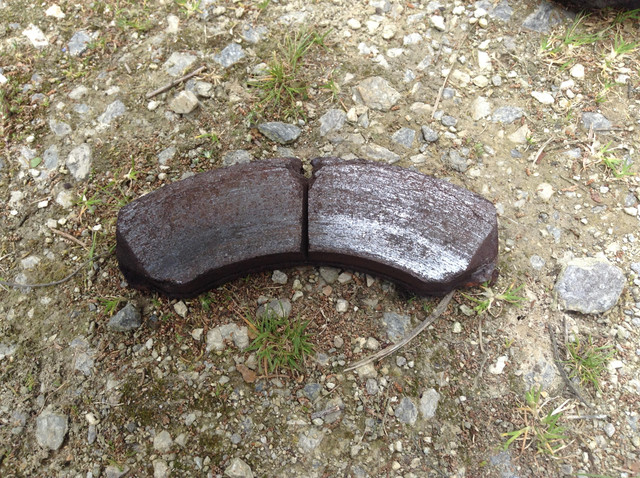 Tatty and basically falling to bits. So, now we have brake pads done all round. All being well I'll not need to do them again..........

I have been planning to tidy up the front wheels for some time. The rears have factory chrome trims to hide the scabby wheels. Front don't and Iveco pucker trims are too much. Cheaper ones don't (as far as I know) have the vents, so no cooling to the discs. So paint it is then......

Now I'm not much cop with paint, so I decided to have a go on the spare wheel 1st, so if I made a 'lash-ups' it wouldn't be too much of an issue. Being under-slung at the rear, this was also by and far the worst of the 3 'in need'. 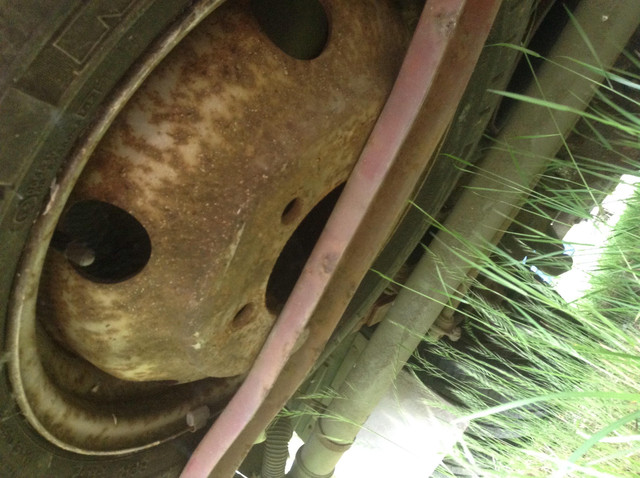 Wire brushed, hand sanded then brushed off and cleaned up with white spirit. 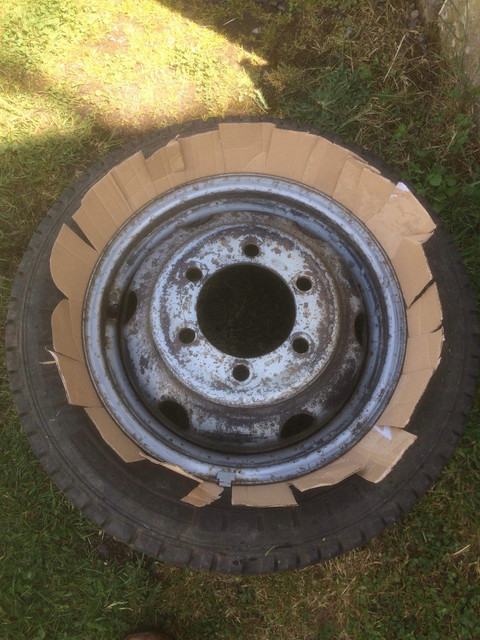 Air out and card inserted to mask it off. 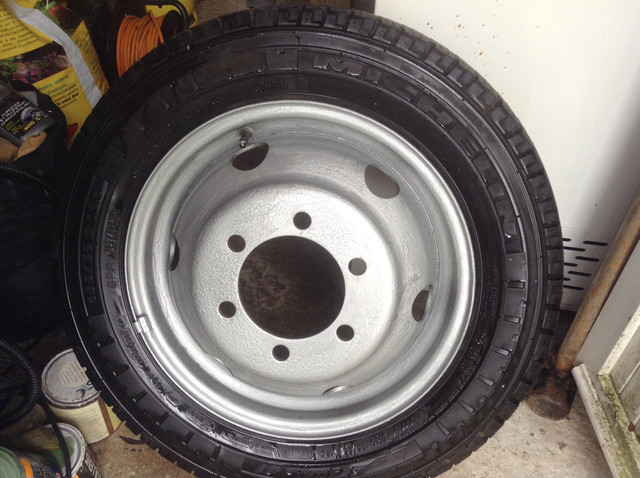 Two coats and a bit of dressing later

Not perfect I know, but a good improvement & I'm happy enough to have a bash at the other two.

That looks fine to me, even when I view the forum on a 43" telly screen and enlarge the image!

I'm liking how much camper content there is on the board these days, must find myself such a vehicle some day as the bed in my daily Toyota bB is somewhat lumpy and the seat belt buckles leave their mark on the skin after a night spent sleeping in there, but then it's primarily a car which just happens to come with an optional end kitchen, a driveaway awning and an onboard fresh water tank. This juggernaut of yours is much more like the sort of van in which one could probably live full time if that were your thing.

With a 2 week 'break' in the gite season, we finally managed to use The Jalopy 'in anger' for the first time this year!

The Jalopy munched the miles happily, did 12 days away & only on the first night did we have electric hook up. The rest of it was 'wild parking' on farms and the like.

The solar panel, the gas generator & the marine toilet all worked fine.

Went down in 2 hits on the toll roads & zig-zagged back up.

Got up to 1400 metres above sea level on those twisitng hair pin mountain roads too, The Jalopy got a tad warm on those mind

1700kms in total and for once, a trip with no drama! Go Jalopy!
Paul240480
http://www.gitessouthbrittany.com
Top
Post Reply
50 posts

Users browsing this forum: No registered users and 11 guests