Post pictures and stories about your cars both present and past. Also post up "blogs" on your restoration projects - the more pictures the better! Note: blog-type threads often get few replies, but are often read by many members, and provide interest and motivation to other enthusiasts so don't be disappointed if you don't get many replies.
Post Reply
540 posts
Message
Author

Found this site on another forum recently .. seems to be links to suppliers as you find the tyre you want. Has a few options if you search down past the ditch-finders. I've also used TyreLeaders in the past and get a local fitter to do the deed .. for a "contribution to their Xmas party fund" .. ie cash in hand

Hmm...that website seems to struggle a bit for this car! 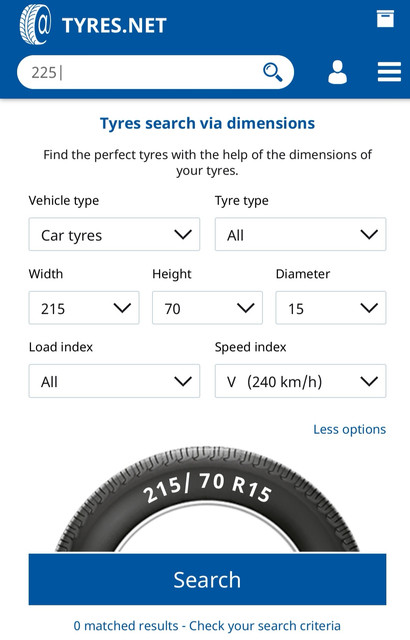 There were some expensive ones .. maybe not in that V rating though ..

Or look for S and get White Sidewalls!

Or look for S and get White Sidewalls!

Think I need to be careful of the speed rating as tyres are one of those things that my insurers state in their paperwork must be maintained to the original specs - so V rated it is.

Before we even thought about looking at new tyres though we needed to sort the tracking. The horrible tramlining, wandering to Lada extents under braking and steering wheel being off centre told me it needed attention. This also meant that signalling right was a perpetual fight with the self cancelling mechanism.

We had some abnormal tyre wear too.

Offside front being the worst: 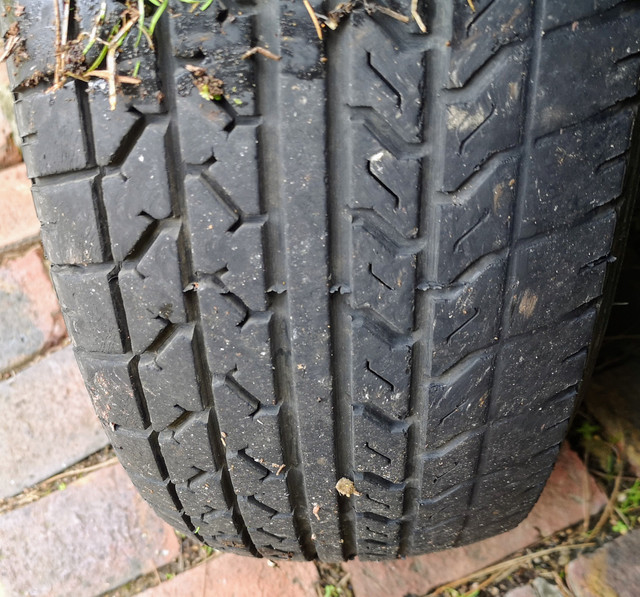 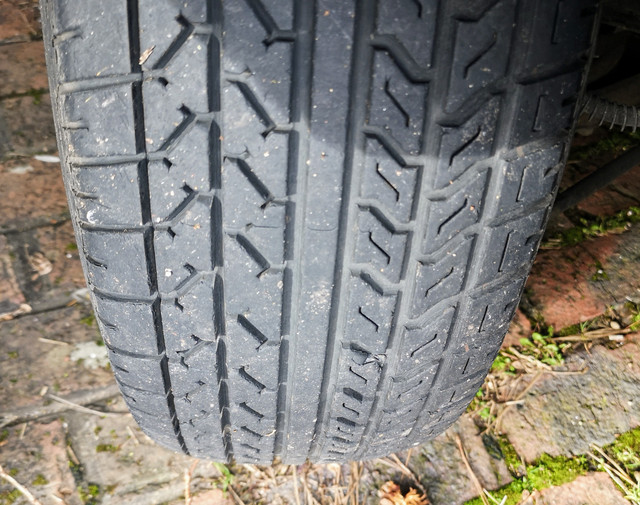 Wear is less pronounced, but there's a couple of places where there's evidence of minor chunking of the tread. These tyres really need to be binned. Now.

The rears have plenty of tread and don't look to have any abnormal wear. 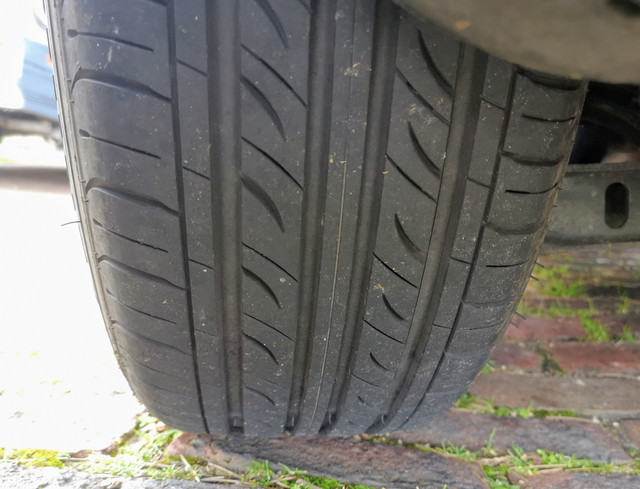 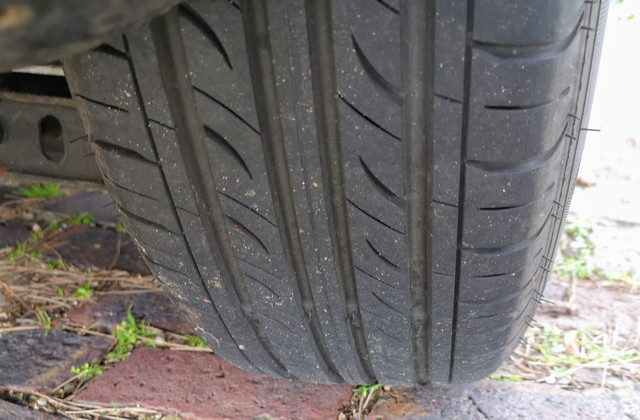 Despite the tread they provide only slightly more grip than aerospace grade teflon, so are not long for this world either.

While the car was up on the ramps I had the opportunity to have a poke around to see if I could track down where the exhaust was occasionally buzzing against the bodywork. Didn't take long. 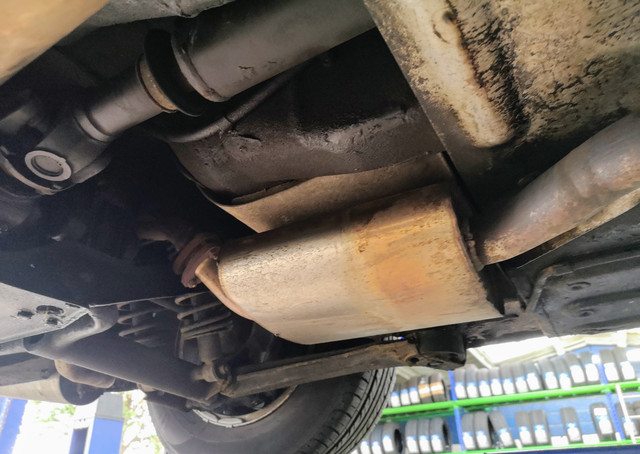 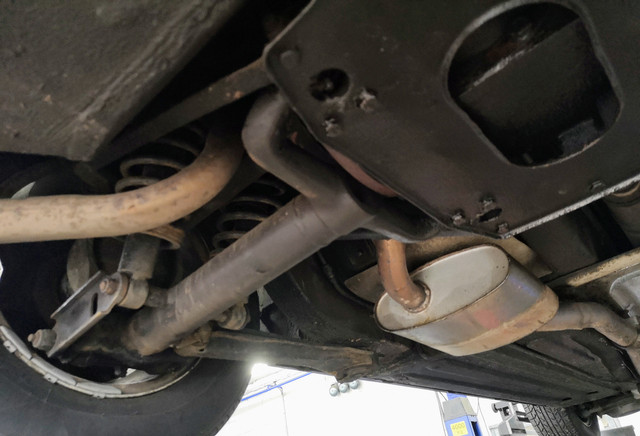 That silencer is the guilty party. It's sitting all of about 1/8" from the heat shield above it and any movement of the system makes them touch. Given the offside system sits an inch lower at the tailpipe, I reckon the whole rear of the system just needs to drop a bit. Shouldn't be a hard fix.

While I was under there I was able to confirm that the rear gearbox mount looks pretty much brand new. Given they're a bit of a known weak spot that's nice to see.

Fifteen minutes later we no longer have ridiculous amounts of toe out. 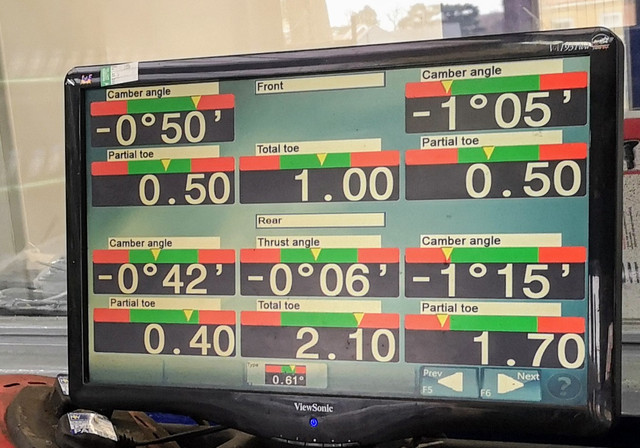 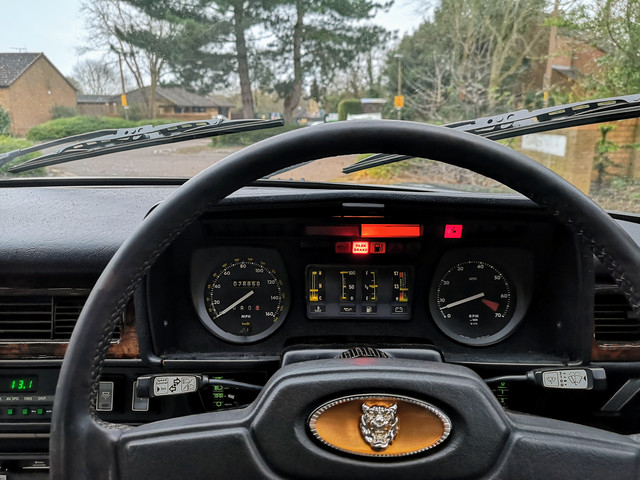 The disconcerting fidgety sensation has now left us which is nice. It was particularly bad before when you went over the white line while changing lanes on the dual carriageway for example. Plus she now brakes in a straight line which is nice. That required nearly Lada levels of correction when braking from speed before. Hard to tell if it's just in my head, but it feels like it's now rolling more freely too...wonder if that will translate to any additional MPG...probably not!

I'd a few tasks planned for today but wound up slimming the list down rather a lot as it seemed to be absolutely freezing outside despite the thermometer showing 8C. Not sure if it's just my being more tired than usual lately is making me feel it more lately.

Now everything has dried out again there's a pretty clear mark where the water has been finding its way in through the windscreen seal. 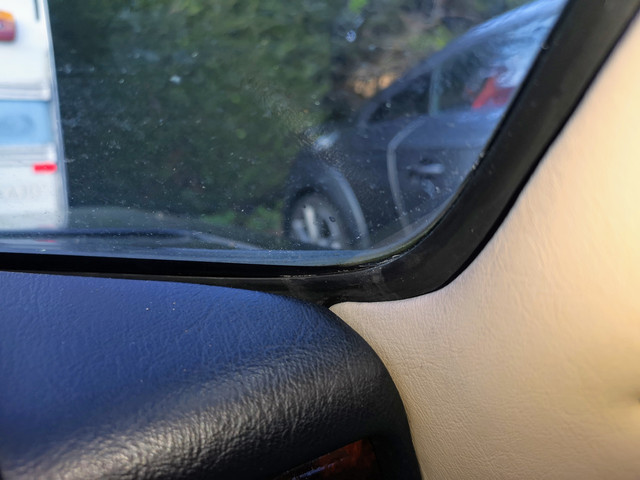 This tends to make me think that the water has indeed found its way in between the glass and the seal rather than the seal and the windscreen surround at least. It's only a theory at this stage though.

Some of this stuff was deployed to hopefully find and seal the leak. 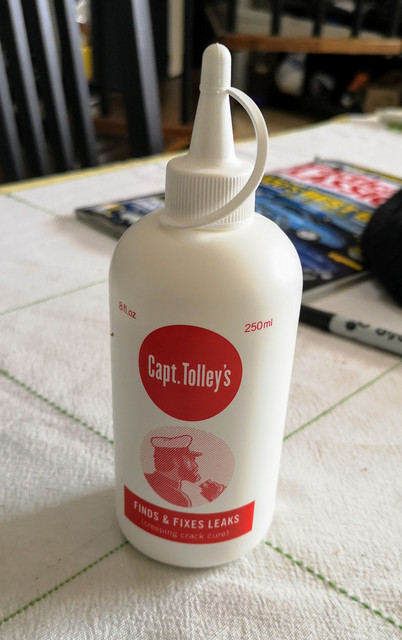 It's been years since I last used this stuff but I'm sure it's become more unruly... really struggled to get a small enough amount out of the bottle. Maybe I've just become more clumsy, or the smaller bottles are just easier to manage.

While I had it out I also gave the windscreen seal on the Invacar a going over with it. That's been about 90% watertight since I did some work on the seals but still leaked a little so hopefully this will help.

Main job for today though was to see if I could do something about the exhaust touching the floor. This makes an annoying growling noise when pulling away or turning hard right. It's really annoying, and we had identified the issue was a lack of clearance above the front nearside silencer. It looks like the situation could be resolved by dropping the rear of the system by an inch or so.

There was a bit of flexibility available by rotating the rear silencer as the hanger is attached to the body on the outlet side. So I loosened both and turned it to give the greatest clearance. This has definitely helped but it's still buzzing occasionally. So I'll need to pull that silencer and "convince" the hanger to give me a little bit more clearance.

While I was sitting down by that corner though I did spot some bodywork that's definitely going to need some TLC sooner than later. 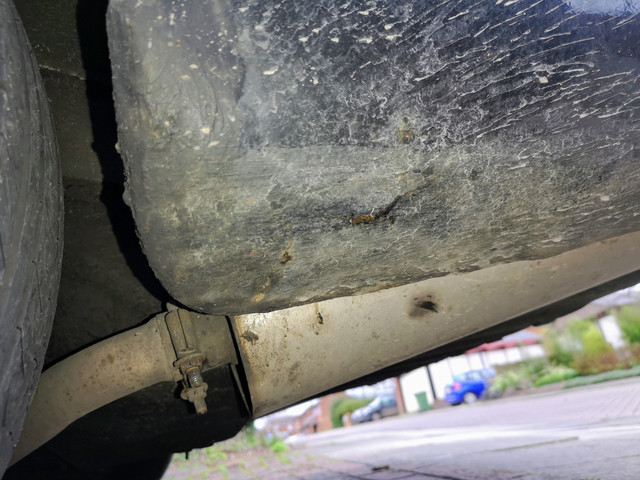 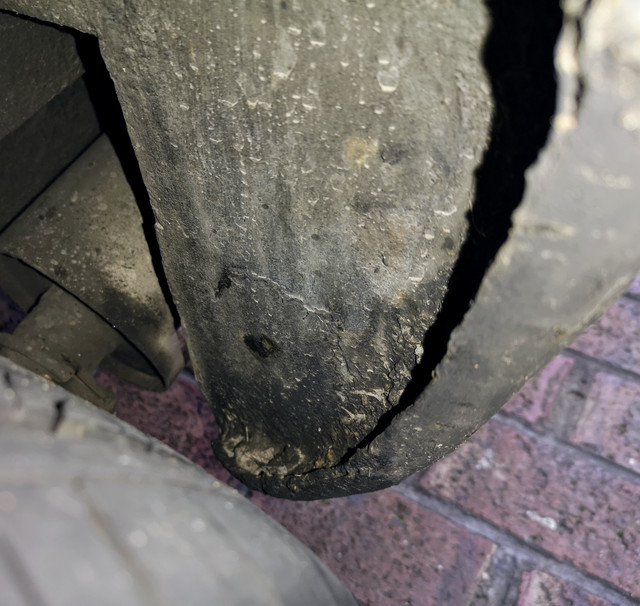 I have a sneaking suspicion that if I start poking here I'll end up with a not insignificant hole. To be fair it shouldn't be the end of the world to sort and it was inevitable I'd find a hole somewhere in a 35 year old Jag so I'm not hugely surprised.

Will I be able to resist the temptation of seeing what she sounds like without the rear silencers given I need to remove the one to mess with the hanger? Not a chance!

Speaking of bodywork, did a bit of work on the house today. I managed to take a chunk out of this wall a few years ago. 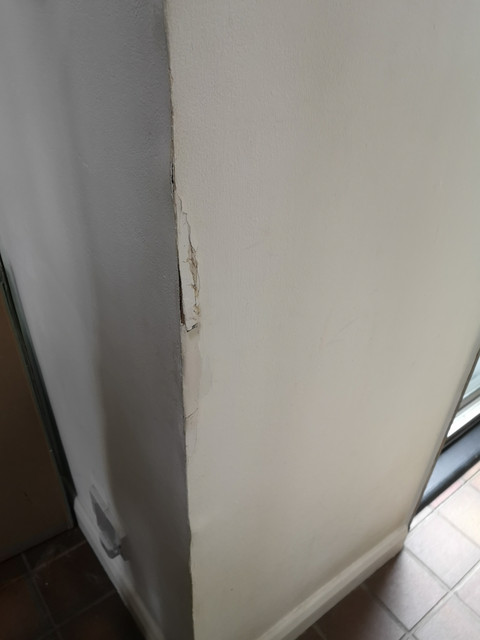 It's always going to be vulnerable to things like this as it's a major thoroughfare and you're pushed towards the wall as you need to walk around the staircase. That damage was done by my phone sticking out of my pocket clipping it on the way past.

Hopefully this will prevent a repeat performance. 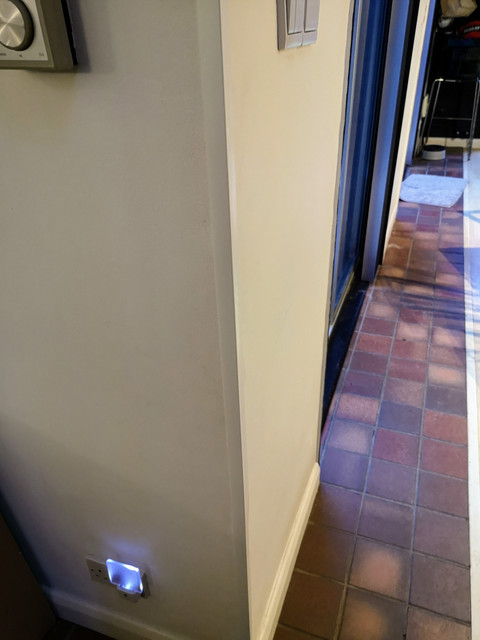 At the very least if I do it again it's just a few quid's worth of plastic coving to replace rather than messing around with filler and things like that.
My website - aka. My *other* waste of time
Current fleet: 73 AC Model 70. 85 Sinclair C5. 85 Jaguar XJ-S V12 HE. 90 Mercedes 208D AutoTrail Navajo. 96 Citroen Xantia Activa.
Top

Regarding the rust: have a think before you drench it in rust preventatives. That's going to need some fairly serious welding, with new metal being required, and most rust preventatives will catch fire when you weld, making it much more difficult and dangerous. As you say, that needs doing pretty soon, so I'd suggest that retarding the rust for a few weeks isn't worth the extra hassle you'll create by covering it in flammable materials.
Some people are like Slinkies - they serve no useful purpose, but they still bring a smile to your face when you push them downstairs.
Top

Luxobarge wrote: ↑
Wed Feb 19, 2020 9:05 am
Regarding the rust: have a think before you drench it in rust preventatives. That's going to need some fairly serious welding, with new metal being required, and most rust preventatives will catch fire when you weld, making it much more difficult and dangerous. As you say, that needs doing pretty soon, so I'd suggest that retarding the rust for a few weeks isn't worth the extra hassle you'll create by covering it in flammable materials.

Agreed, and the lower edge of the outer sill appears to be separating along by the flange where the various sections come together, which suggests that scale is building up on that flange and also, could it have had a repair patch welded over the existing sill at some earlier time in its life? Either way, this car will be spectacularly good once these jobs have been attended to, and you're the person to take it to the next level.