Post pictures and stories about your cars both present and past. Also post up "blogs" on your restoration projects - the more pictures the better! Note: blog-type threads often get few replies, but are often read by many members, and provide interest and motivation to other enthusiasts so don't be disappointed if you don't get many replies.
Post Reply
664 posts
Message
Author

Well that was unexpected. Someone has just made me a distinctly left field potential swap offer for the Lada.

My initial reaction is an equal mix of the following:

"Hell yes! Not going to get another shot at that! You only live once."

Not going to drop any more details yet as nothing has been agreed yet...but definitely considering the offer.
My website - aka. My *other* waste of time
Current fleet: 73 AC Model 70. 85 Sinclair C5. 85 Jaguar XJ-S V12 HE. 90 Mercedes 208D AutoTrail Navajo. 96 Citroen Xantia Activa.
Top

Aww tell us all the gory details please!
Top

My money's on its being a front wheel drive German motorcycle with a 5 pot radial engine built into the hub, a recumbent riding position and a build date some time in the twenties.

There are actually two candidates on the table just now.

Number two is somewhat surprisingly my old Saab again. This has just had something like two grand spent on it cutting out all the rust around the driveshaft tunnels and rebuilding that area. Kinda of two minds over this one as there is some emotional baggage attached to that car (not least in that it's where I had my last real conversation with my mother before she passed away). There are probably still a fair numbers of niggles it needs sorting.

If option one doesn't pan out, I may well still go for it.

Well the driving position is probably nearly as low as in the Sinclair C5...It also has more cylinders than any car I've ever owned so far.

Don't want to spill too many beans though until we know if it's actually happening yet though.
My website - aka. My *other* waste of time
Current fleet: 73 AC Model 70. 85 Sinclair C5. 85 Jaguar XJ-S V12 HE. 90 Mercedes 208D AutoTrail Navajo. 96 Citroen Xantia Activa.
Top

Well that visit to the garage could have gone better. 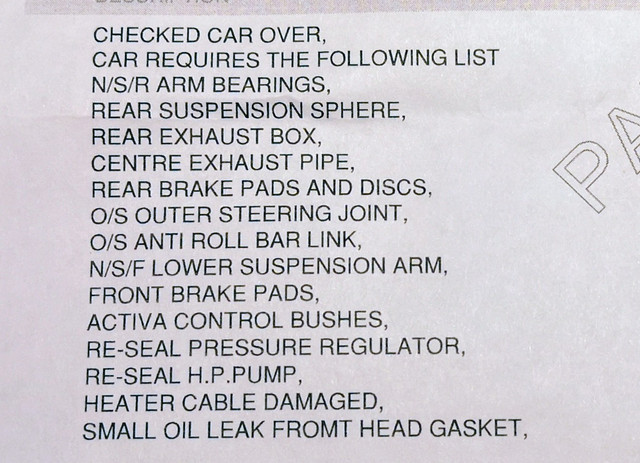 They reckoned somewhere in the region of £1500 worth...even taking into account that I had some of the required parts already in the car.

I already knew about the stuffed lower control arm bush (that's the main thing it was in there to sort), the rear brakes were spotted at the end of last week when the tyres were changed, and I knew the exhaust was ropey but was kind of hoping we could scrape a couple months more out of it as I've been hoping to get a stainless system fitted, and there's always been a creak in the front end, so I was expecting a bush or two to need attention. The rest however was a complete bolt from the blue.

I'm a bit of two minds about the reported LHM leaks...those areas have been slightly damp with fluid for the two and a half years I've had the car...but in those two and a bit years and 20+K miles she's never used a drop of fluid...so it can't be leaking that much!

The rear arm bearing has me slightly puzzled... usually those failing give a load of warning years before they actually become an issue, with creaking, groaning etc...but aside from a rattle from the exhaust recently, the rear end has been totally silent...and I've never noticed it graunching or anything when dropping or raising the suspension. No abnormal tyre wear or anything like that either. Just slightly surprised that I've not seen that one coming...

Will need to do a bit of a part sourcing binge and see what I can get ticked off on my own driveway to see if I can get that bottom line down to a slightly less painful figure.

The work will be done though... despite the fact that it's probably going to still wind up exceeding the value of the car...because let's face it, what on earth would I replace it with?
My website - aka. My *other* waste of time
Current fleet: 73 AC Model 70. 85 Sinclair C5. 85 Jaguar XJ-S V12 HE. 90 Mercedes 208D AutoTrail Navajo. 96 Citroen Xantia Activa.
Top

So the Xantia is likely to be in "dry dock" until after the Festive period...This combined with a taker being pretty much lined up for the Lada means I've given myself a metaphorical kick up the back side to get it back on the road.

Currently awaiting the arrival of a brake caliper overhaul kit (the offside front one weeps slightly), but nevertheless I've got it booked in for an MOT on Friday. Hopefully nothing else will drop up, if so I've no worries about popping back next week when the brake parts arrive. The garage I use is less than ten minutes from my door, so it's not a huge chore to get there and back.

The Lada was unceremoniously dragged out of hibernation this morning and thrown at my local garage for an MOT without so much as a lighting check. Was expecting a list of minor stuff just due to having sat around for a month or two plus a year's use (albeit covering only a couple of thousand miles, mostly in fair weather). 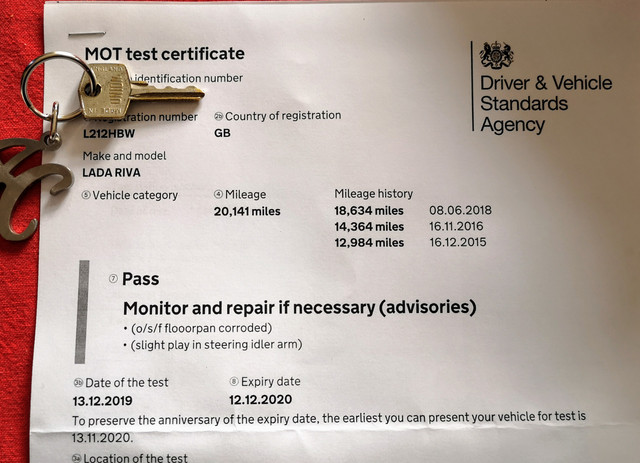 Unexpected, but not going to complain!

The advisory for some underbody corrosion has been there as long as I've had the car, there's quite a bit of surface rust that could do with a scrub down and attacking with some Vactan and Dinitrol. She's never done any winter service in my ownership and I've generally tried to avoid wet weather driving where possible, so it's never got any worse. Has always been on the to do list, sadly has just never got to the top.

The steering idler mentioned has a (nylon?) bush in it, and they're prone to wear - replacement inserts are less than a tenner...and I've got one in stock already. Though it's nowhere near bad enough to worry us just now.

Having this car roadworthy again is going to make the logistics of this weekend where we need to get to a charity event with the dogs this weekend immeasurably easier.

Last year when she was in for the test I was still trying to get to the bottom of a small vacuum leak which meant the fuelling wasn't quite spot on so the emissions test was a rather mediocre pass. Having finally sorted that leak, I was curious to see what she would show today. 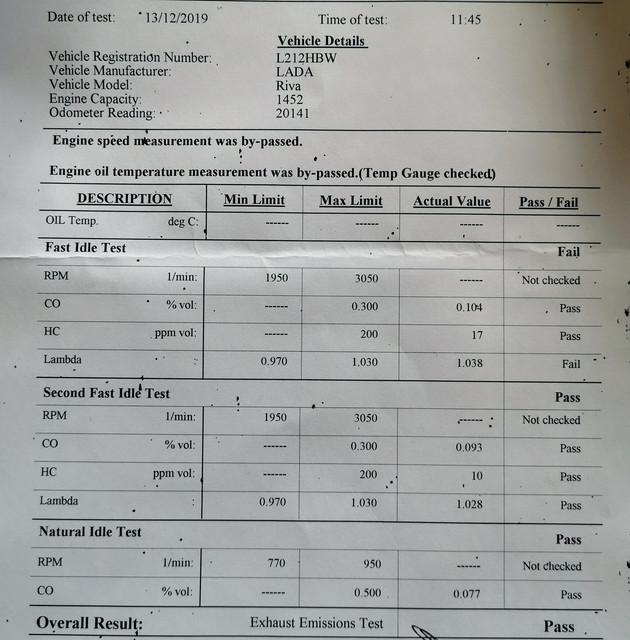 Ignore the fail on the first test. The cat on this car is miles from the front of the car and takes an age to get up to temperature when you're standing still.

Lambda is still showing slightly high, though both me and the tester agree that that's probably entirely down to there being a couple of small leaks in the exhaust.

Last test we did with the carb in place we eventually managed to squeak through at 0.297% CO (limit is 0.300%)...so fair to say she's running quite a bit cleaner now I think. I reckon 0.093% is a decent figure for any engine...much less one from behind the Iron Curtain fro. The early 70s essentially with what many consider to be a very crude injection system grafted onto it. The cat is the original one from 1993 too.

Seeing those numbers makes it seem a lot more worthwhile having done the work (plus the car being way nicer to drive!).

One definite symptom of an old car that's not been used for a while was found though...I don't need to actually be able to *read* the instruments do I? 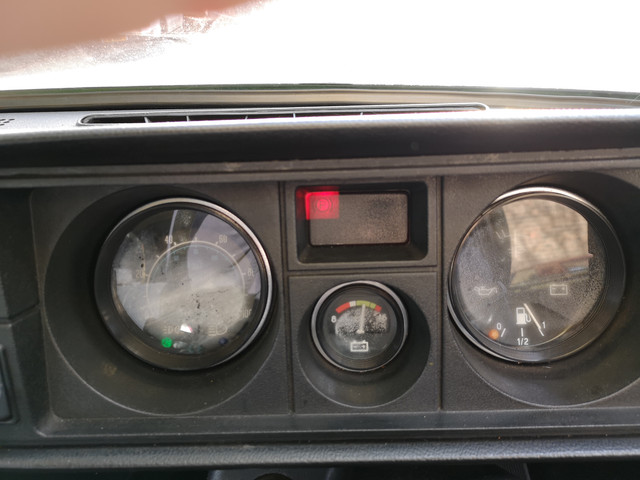 Think the first few runs out will be done with the heater on full blast and the rear windows open to try to encourage the moisture out of the car a bit.
My website - aka. My *other* waste of time
Current fleet: 73 AC Model 70. 85 Sinclair C5. 85 Jaguar XJ-S V12 HE. 90 Mercedes 208D AutoTrail Navajo. 96 Citroen Xantia Activa.
Top

Cat litter in old socks (preferably without holes!) is said to work .. or a small dehumidifier.

That happened on my old Alfa 156 overnight and it permanently screwed up the lcd panel with odometer etc when I turned the ignition on ..

That happened on my old Alfa 156 overnight and it permanently screwed up the lcd panel with odometer etc when I turned the ignition on ..

The Lada is a bit of a pig for doing this I think because the lenses on the instruments are actually glass rather than plastic. 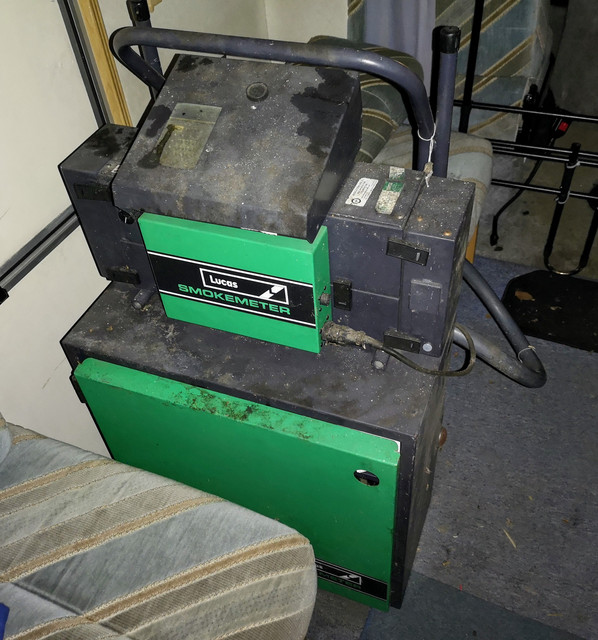 Yet more ex-garage diagnostic equipment. This time in the form of a diesel smoke opacity meter.

This control panel has a very late 80s/early 90s look to it under the grime I reckon... 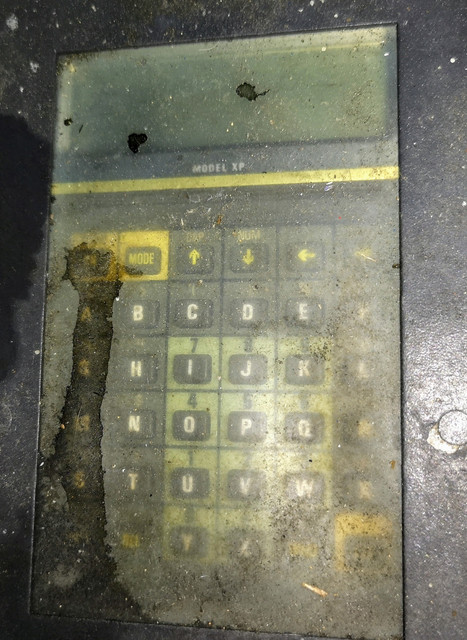 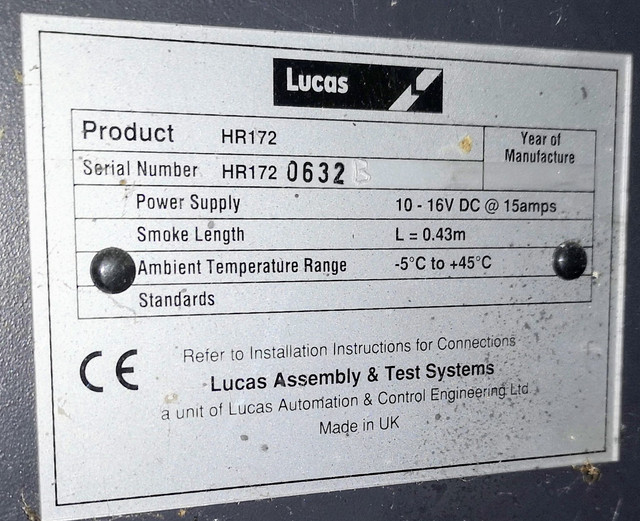 These things are pretty simple, so no reason it shouldn't work. Pulled one apart a few years ago and it was basically just a high intensity light source (halogen MR16 lamp in that case) in one side of the case and a detector at the other side plus some hardware to draw the air through.

Can't see it getting a huge amount of use - especially given the van basically doesn't smoke at all once started - but could be handy checking stuff for others and it's nice to know I've got the bases covered... slowly but surely getting my garage kitted out.
My website - aka. My *other* waste of time
Current fleet: 73 AC Model 70. 85 Sinclair C5. 85 Jaguar XJ-S V12 HE. 90 Mercedes 208D AutoTrail Navajo. 96 Citroen Xantia Activa.
Top
Post Reply
664 posts

Users browsing this forum: No registered users and 13 guests