Post pictures and stories about your cars both present and past. Also post up "blogs" on your restoration projects - the more pictures the better! Note: blog-type threads often get few replies, but are often read by many members, and provide interest and motivation to other enthusiasts so don't be disappointed if you don't get many replies.
Post Reply
519 posts
Message
Author

Zelandeth wrote: ↑
Thu Aug 29, 2019 11:44 pm
I figure that by far the best thing for TPA at the moment is to cover miles given how long she's sat dormant. To this end I took the very long way round both to and from the shops this afternoon, covering roughly another 40 miles. 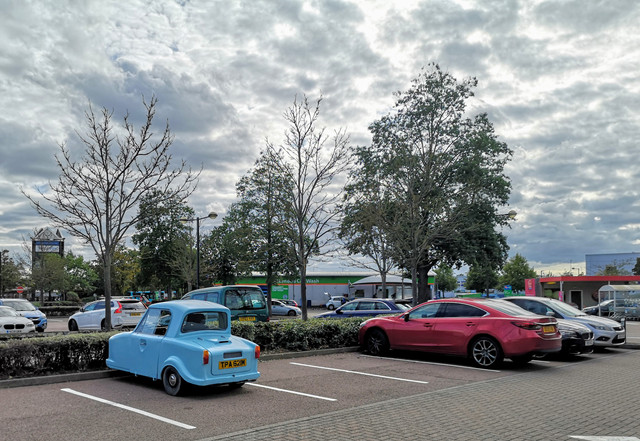 Nothing I've ever owned does quite such a good job of making conventional parking spaces look absolutely massive.

She didn't miss a beat. The only gremlin I have discovered is that the heater control flaps aren't closing fully in the control box...so the heater doesn't switch off quite fully. The efficacy of the heat exchanger definitely isn't in doubt...The air coming out of the vents is *painfully* hot...so it would be nice to be able to switch it off properly. Especially as the outlet for the main cabin heater is under the seat. Gets a bit toasty after half an hour or so.

I'm new to buying classic cars, I've just always had a real admiration for them. What kind of price would this one go for?
Top

Fourth row of images down, 2nd from left. I haven't looked into sizing ..

It's hard to say really. These are cars which have quite a niche appeal, and the market for which is only really starting to figure out what it's doing with itself at the moment.

The fact that the knowledge that these cars can in fact be legally driven on the road again is starting to become more widely known does seem to have caused a bit of a surge in cars appearing in the last year or two. Previously they'd just been forgotten about because no one figured you could ever do anything with them.

Pricing is hard as it's very much a case of "what someone is willing to pay" rather than there really being any universally accepted guide price to work around. I have seen a couple of mint cars for sale advertised at £5-6K, but I've absolutely no idea whether they actually sold and I think they were advertised very optimistically.

Realistically, I'd expect to (expect to have to dig around for a while now as there's still not a huge number of them about) be able to pick up a reasonably complete car in average condition in need of recommissioning for around a grand. That's very much just what seems reasonable to me though based on my own experience and what I've seen a few sell for lately...I don't write buyer's guides and am not a market expert!

I wouldn't be surprised to see that going up though as interest in these cars does seem to be growing and given they were scrapped on mass back in 2003, even bearing in mind the fact that quite a few escaped, the pool of project vehicles isn't huge. Demand is definitely starting to catch up with supply now...so numbers can only go one way you'd think.

Cheers for that. Another possible source then. I just need to confirm what the thread on these is then hopefully getting a new set ordered should be relatively painless it looks like.
My website - aka. My *other* waste of time
Current fleet: 73 AC Model 70. 85 Sinclair C5. 85 Jaguar XJ-S V12 HE. 90 Mercedes 208D AutoTrail Navajo. 96 Citroen Xantia Activa.
Top

A little closer examination of a slightly less mangled stud has me now pretty certain that we're looking at 3/8" UNF. That would be 9.52mm when it came fresh off the cutter... 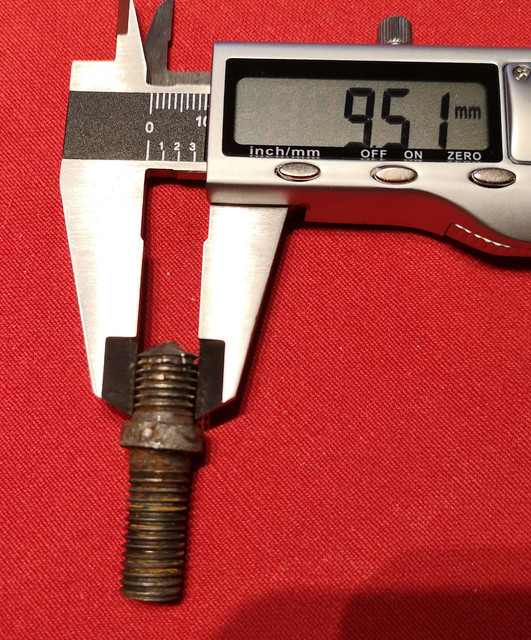 A friend locally has a set of imperial thread gauges which should help us confirm the details when I get a chance to swing by their place. Once we've confirmed that sourcing replacement studs or bolts shouldn't be hard or expensive.

Another little accessory arrived for TPA today which I had honestly forgotten ordering. 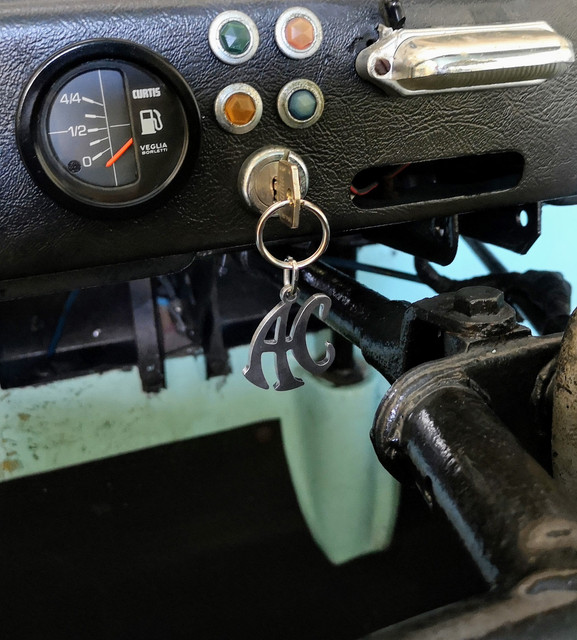 Got to have a marque appropriate keyring...which reminds me that I really need to find a nice Mercedes one for the van sometime...
My website - aka. My *other* waste of time
Current fleet: 73 AC Model 70. 85 Sinclair C5. 85 Jaguar XJ-S V12 HE. 90 Mercedes 208D AutoTrail Navajo. 96 Citroen Xantia Activa.
Top

How much do they sell for?? Well I took delivery of a Model 70 just yesterday, only £75 too (plus postage)!!

OK it's a bit small, 1/43 scale to be precise and is now proudly on display in my "3-wheelers and Reliants" display case, bracketed by a Scootacar and a Bond Minicar.....

All three of these models are excellent and bought from "Sams Model Cars" https://samsmodelcars.com/

Along with this motley collection of Peels, also from Sams Model Cars.....

Just a few of the Reliant models too. None of these are from Sams Models though, there's 2 Kittens (saloon and yellow estate) from Frog Models plus four Kitten "vans" from Durham Classics, plus a selection of the Vanguards/Lledo Regal vans (I have all of these) and some Scimitars (plus (just) an RS200).

The whole display includes the obligatory bubble cars, some Morgans and Messerschmits, Raleigh and Reliant pre-war vans plus an assortment of Scammel Scarab models, pretty much all in 1/43 scale...

That's quite the collection there!

I've very much got my eye on one of the Model 70 miniatures. Just need to try to find a month without any major unexpected expenditure to roll round before I can justify spending that much on something that I really don't have anywhere to display yet!

Sadly things like getting the full compliment of wheels reattached to the car is currently taking priority.
My website - aka. My *other* waste of time
Current fleet: 73 AC Model 70. 85 Sinclair C5. 85 Jaguar XJ-S V12 HE. 90 Mercedes 208D AutoTrail Navajo. 96 Citroen Xantia Activa.
Top

This is only a fraction of what I have, been collecting die casts since the late 1950's, in fact still got many of them. There are a few Dinkies and Corgis but mostly I have Tri-ang Spot-On models, in fact at least one example of every one they ever issued (between 1959 and 1967 when they went out of business), including numerous lorries and buses, tractor, lambretta scooter, all at 1/42 scale....

On our walls we have 6 display cases, 2 large (for Spot-On) plus 4 medium, one for the Reliants and odd three- wheelers, one for non Spot-On plus 2 for model buses....

Oh and as an oddity I've a full set of Tri-Ang "Minix" tiny plastic cars, including the one that many collectors claim never existed (it was released by Hornby after Tri-Ang went out of business).

I've always felt really sad that I've yet to find a decent miniature of a Lada Riva (ideally estate).

I have recently found a few. Merc T1 van - which I think turned up a matter of days before I actually got one...odds of ever finding one of my actual camper are slim to none I imagine.

Also have a nice little coach from when I spotted a company were doing a Duple Dominant II in Parks of Hamilton colours. It's technically a Volvo...but at a glance it's visually almost identical to the Bedford one a friend used to have which I spent far too many hours driving and working on. I *will* own one one day.

The second one's from the Ukraine so the postage is high but it does look a very nice model.

There's also Russian produced home market models about, occasionally they come up on e-bay but also worth keeping an eye on the Vectis "specialist diecast" auctions - it's surprising what does go through them.

Wow! That 24th scale one comes with working lights and even brakes! That leads me to believe that the braking system on the model can't possibly be based around the same sort of rear shoe adjusters as the 1500 Kombi I owned for a while back in 1986, when it was only two years old. Wretched Paxolin washers that were supposed to grip the shoes as they wore down, trouble was that the adjusters would tend to cause the rear brakes to refuse to release when the shoes were new, but then they'd allow the adjustment to come off or on at random when the shoes had bedded in, causing some scary moments. Maybe that was why my bright blue car had a pooh brown carpet?

I did like the thing though, but I like these models better.
J
"Home is where you park it", so the saying goes. That may yet come true..