Post pictures and stories about your cars both present and past. Also post up "blogs" on your restoration projects - the more pictures the better! Note: blog-type threads often get few replies, but are often read by many members, and provide interest and motivation to other enthusiasts so don't be disappointed if you don't get many replies.
Post Reply
628 posts
Message
Author

Decided it would be fun to spend a couple of hours outside in unreasonable temperatures today arguing with the air con on the Jag. Said temperatures being the main reason for having moved it up the list.

Nobody this side of the Atlantic seems to have the compressor to condenser hose actually in stock, despite a number of places listing it. My local hydraulic guy I'd usually use for this sort of things is only doing trade work at the moment. Fair enough.

So I snugged up the hose clips a bit to see if it would do anything...leak immediately stopped as far as I can see. Did get a good couple of extra turns on it. We'll see if the pressure has dropped in the morning.

Next challenge. Excuse the rubbish photo, this was the only way I could see what I was up against because there's a bonnet in the way - whoever thought that front hinged bonnets were a good idea?!? 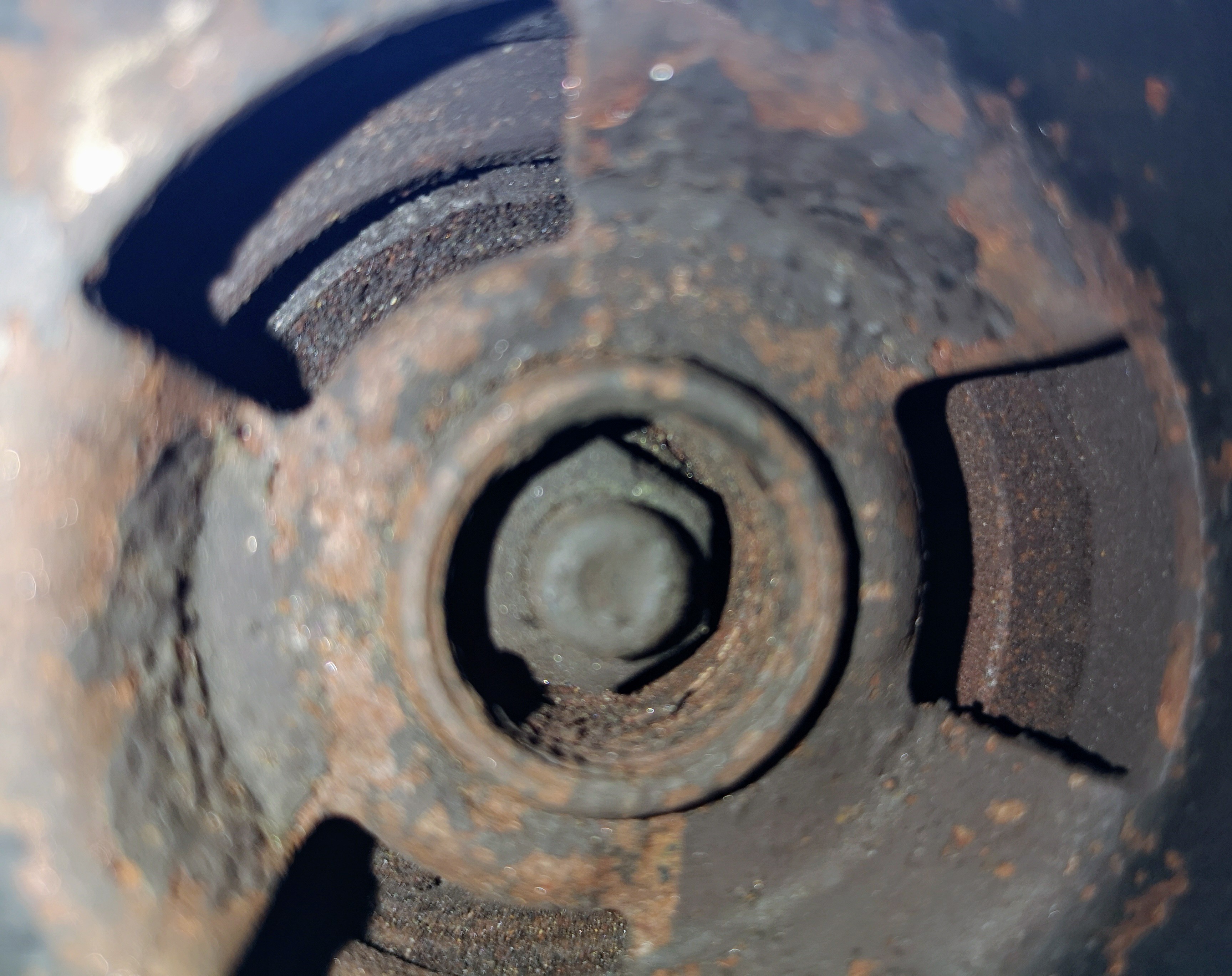 Getting the 14mm nut off the compressor pulley involved downright alarming levels of force but did eventually crack off.

Unfortunately that is as far as I got as apparently I finally need to actually buy a puller. The clutch assembly is well and truly stuck on the compressor shaft. Old school levering and swearing isn't going to cut it this time.

On the plus side the brake fluid leak does indeed appear to have been sorted by fitting the new hoses from the reservoir. Still bone dry now. 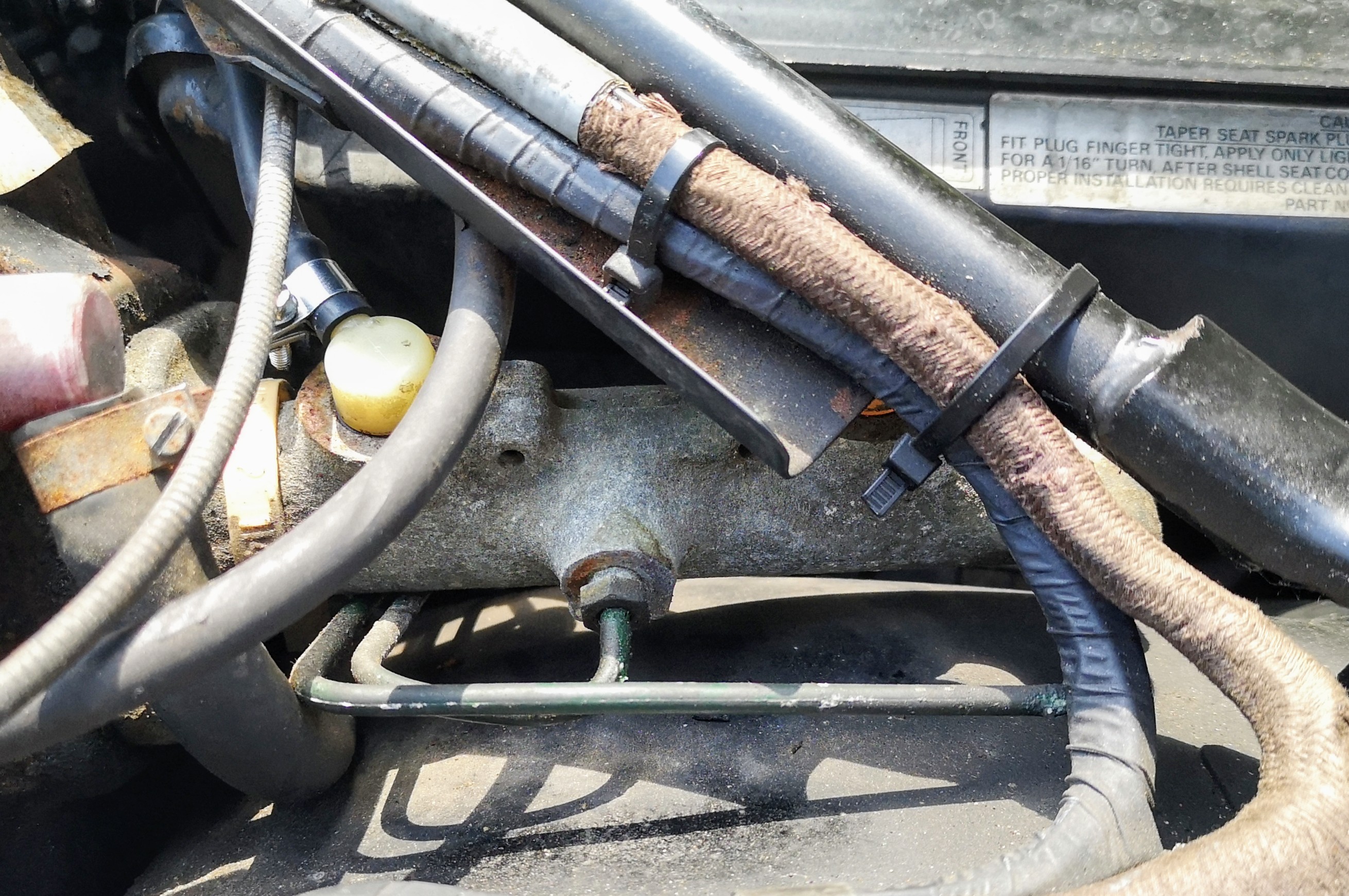 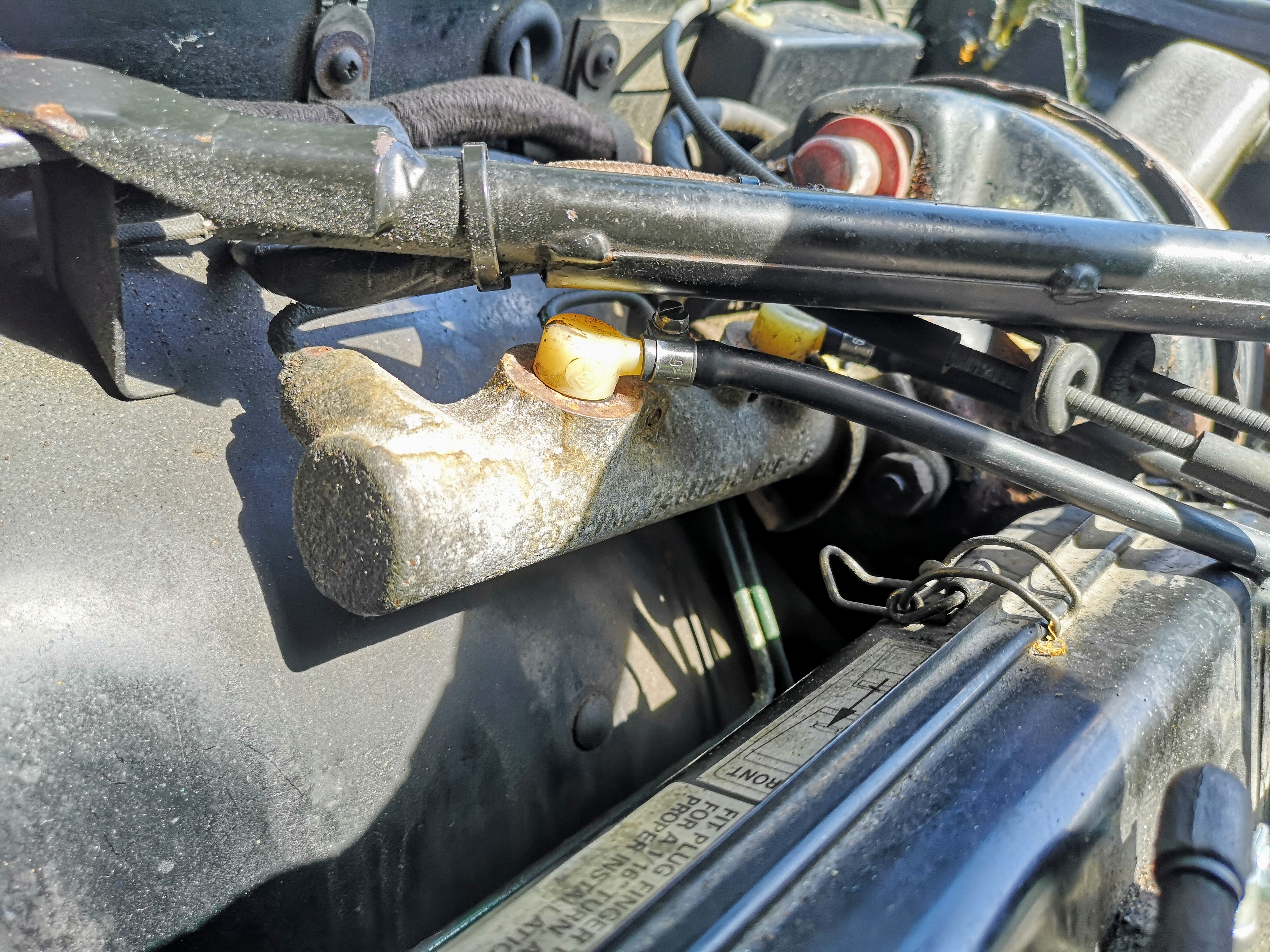 At least that's one thing I can tick off it looks like!

Will get a puller ordered and then resume battle with the air con. The bit I'm really not looking forward to is that I need to remove all the other belts again to put the air con one back on...that was so much fun last time.
My website - aka. My *other* waste of time
Current fleet: 73 AC Model 70. 85 Sinclair C5. 85 Jaguar XJ-S V12 HE. 90 Mercedes 208D AutoTrail Navajo. 96 Citroen Xantia Activa.
Top

First was a general fluid etc check. I didn't expect anything to have moved on anything aside from the Jag, but everything on that is treated with complete suspicion at all times. Especially given how much oil it appears to leak.

Nothing had moved...to be honest, as usual. Had been meaning to properly check the gearbox oil for a while though beyond "there's some in there." 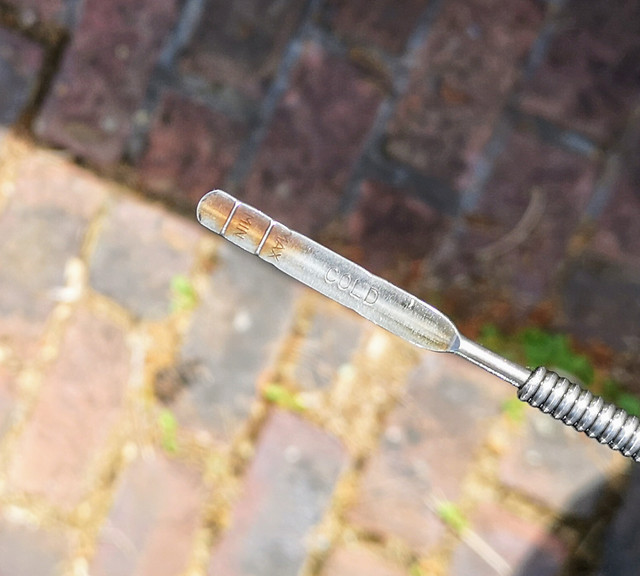 Can't complain there. Slightly high reading is expected due to the slope of our driveway.

Had a look at the A/C, I left it with about 35psi in it after nipping up the leaking hose clamp a couple of days ago. 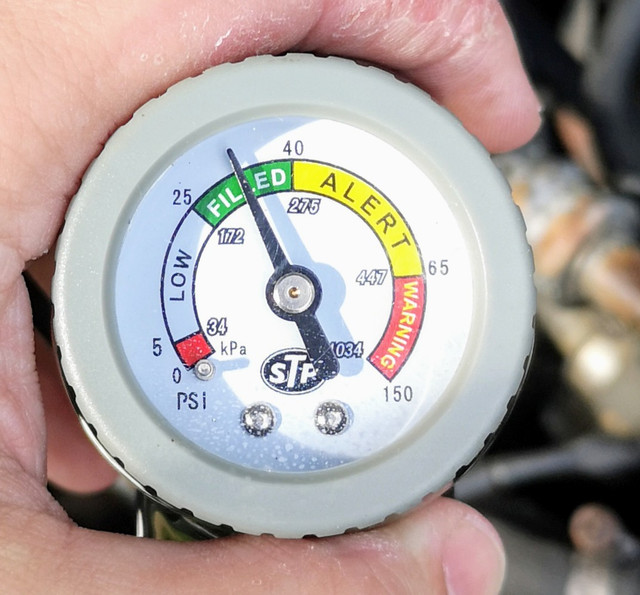 That's an improvement...it was down to about 5psi after this time last time. I really need to find my proper gauge set. It's in the garage somewhere. Will check it again in a week and see if the gas has continued to stay put.

While I was out there I did a bit more investigation of the ticking noise I've noticed over the last couple of weeks. Sounds very much like an exhaust manifold leak...and has now been traced to the furthest back cylinder on the offside (6A?). As disconnecting that injector makes the noise stop.

Hmm. There was a brief period where I thought it might just be a noisy injector, but that hope vanished when I discovered that unplugging the spark plug lead had the same effect. Oh.

I'll get plugs ordered in (was sure I'd included them in the last parts order but apparently not), then whip that plug out. At least it's probably the easiest one to get to! At least it looks that way...I may well come to eat those words when I come to actually pull the plug out! If nothing else it will give me a chance to do a compression test on that cylinder, to *hopefully* rule out head troubles.

If the exhaust manifold needs work, a garage is getting that job. I'm not playing that game.

Speaking of exhausts though, the misaligned tailpipe tips were driving me mad. I needed to do something about them...however discovered that they had now welded themselves into the tailpipes and stubbornly refused to shift. I figured it would be easier to separate them from the silencer off the car. Thanks to being stainless it came apart easily enough and indeed being able to get at it with a hammer meant separating the tailpipe tips took five minutes.

It would have been rude not to test out how things sounded without two huge mufflers on the back... especially as this system is quieter than the factory one, and I'd like to hear the exhaust at least a bit..albeit nothing over the top. An experiment needed to be conducted though.

Yes...I think I will be speaking to someone about making up some slightly less silenced tailpipes for the Black Cat.

Things have been reassembled for now.

The only other thing of note today was spotting the heating controller in the van flashing at me that there was a firmware upgrade available - and being web connected meant that with a couple of button clicks we had the upgrade on the way. 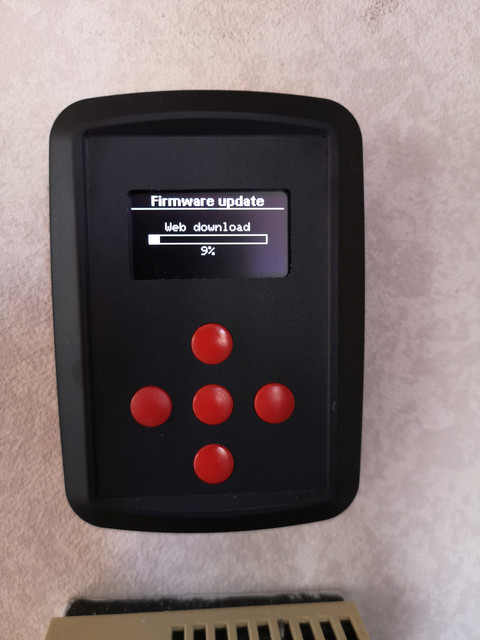 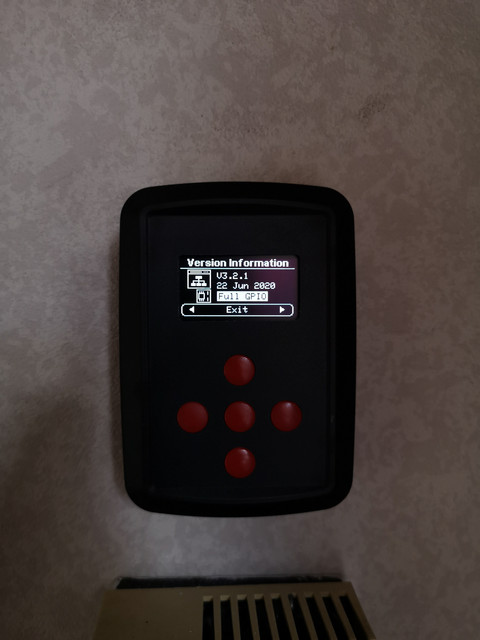 Things I learned yesterday: You need a special tool to wind off/on the clutch pulley on GM/Harrison A6 air conditioning compressors. A normal puller won't cut it, and obviously won't get the pulley back on - it's a friction fit on the compressor shaft, the nut is a safety feature rather than the main means of retention for the pulley.

If I'd used half a brain cell and read up on the job before starting I would have known that and made sure I had said tool in stock. It is now on the way, but if I'd used me head it could have arrived with the new clutch.

Following the rear silencer delete experiment I wanted to at least get a ballpark figure for likely costs involved, however it turns out that our local stainless specialist looks to still be closed. Fair enough to be honest, not really surprised. To be honest there's one over in Cambridge which I'm probably going to be using anyway as several folks have recommended them to me.

It's also about item 28374638 on the priority list. The horribly out of alignment tips had to go though as they made it look like I'd reversed into a low wall and made my OCD twitch every time I walked up to the car.

The only way I could make them sit even with each other resulted in them pointing upwards by about 20 degrees, meaning the system filled up with water whenever it rained.

The purists will probably hate me for it, but I reckon this both solves my immediate issue and actually looks better than the stock exhaust tip arrangement anyway. 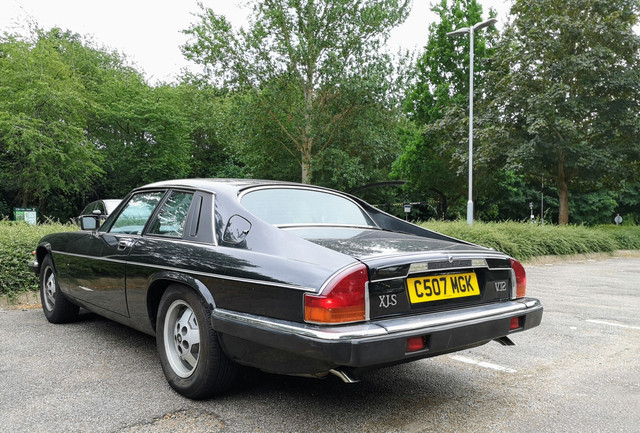 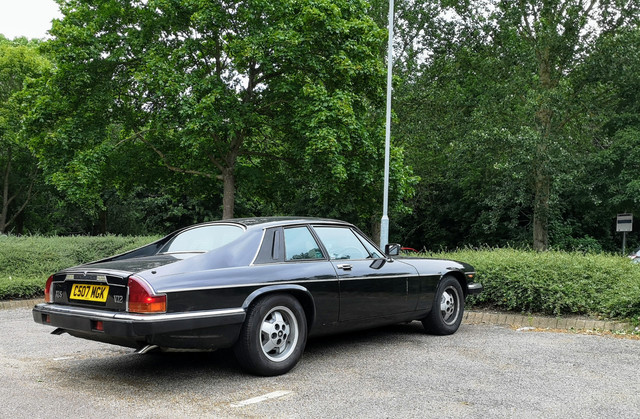 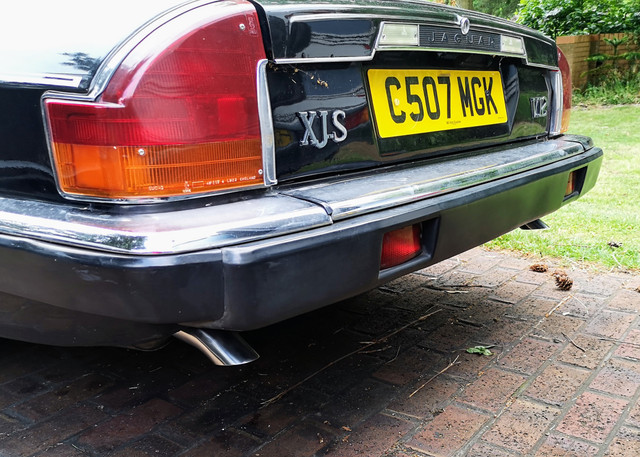 No it's not stock, but I think it doesn't look out of place.

In my opinion, the spindly little double elbow looks right on the saloons, but something like this suits the XJ-S better.
My website - aka. My *other* waste of time
Current fleet: 73 AC Model 70. 85 Sinclair C5. 85 Jaguar XJ-S V12 HE. 90 Mercedes 208D AutoTrail Navajo. 96 Citroen Xantia Activa.
Top

Ill probably be burned as a witch but it suits the car mate.. i don't care if the purists hate it
Top

Besides, is the current OED definition of the word "purist" not "N: a control freak with a God complex and, most probably, a dreadful case of halitosis, who dresses up as a Roman soldier on a weekend and drives a split new, premium brand German car because the Kia dealership was closed"?

Nice to see that I seem to be getting a generally positive reaction to my decision. My plan for this car has always been to use and enjoy it. If a future owner wants to change this back, it will take them all of five minutes (well...once they've changed the exhaust silencers too so it's possible to line things up anyway).

Hmm...I appear in a moment of "I wonder if I could..." to have bought a big (way bigger than needed but it was all I could find locally) sheet of really easily malleable metal...I wonder what my plans for that might be... 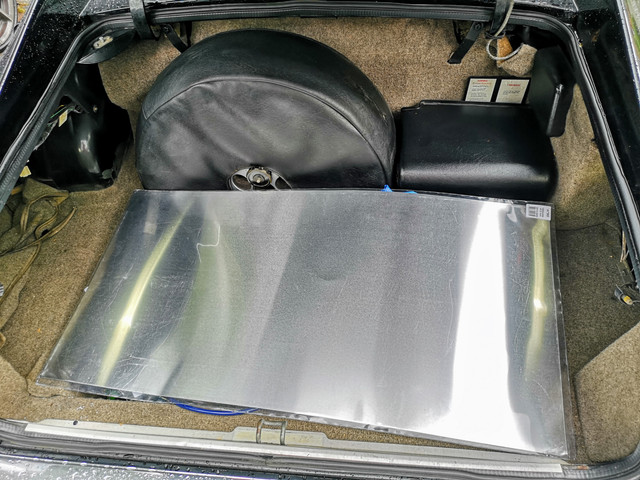 Well that worked well...Mission Burble has been a success.

Well...refined rumble anyway. Burble is more of a V8 thing.

Users browsing this forum: No registered users and 8 guests